The franchise has topped the MAU charts every year since 2013 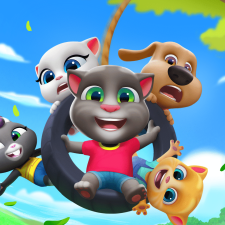 New data from Data.ai has found that Outfit7’s Talking Tom & Friends series is the biggest mobile IP of the last decade.

Games within the franchise topped the download charts every year from 2013 to 2021, beating out heavy hitters like Candy Crush, Pokemon, and Call of Duty.

In 2022 so far, My Talking Tom Friends ranked as the twelfth most downloaded game on the iOS and Google Play stores, while Talking Tom & Friends came in at number nine. As such, it’s clear that whilst the games individually may not be beating out the competition, the franchise itself is more than making up for that.

The strength of the franchise may lie in the fact that it puts a spin on popular mechanics. Whilst virtual pets have been around since the nineties, the USP of the Talking Tom & Friends franchise is the fact that players can speak to the characters, who will then repeat their words. This allows for a greater level of interaction than competitors, and has helped the franchise maintain a high level of engagement with the target audience since its launch.

A pet that talks back

This level of engagement is reflected in the monthly average users (MAU). Data.ai reports that games from the franchise are a fixture in the top 100 games by worldwide MAU, peaking at seven games in 2021 and placing publisher Outfit7 above competitors such as Supercell and Playrix in terms of companies with the most games in the charts.

Speaking of the franchise’s success, Outfit7 CEO Xinyu Qian stated: ““Up to 470 million active users engage with the games in the Talking Tom & Friends universe every month. We create for those users – and we work hard to make sure we’re giving them the very best products and experiences.”

“We’re proud to see that work reflected in the charts, and grateful to our fans.”

Last year, Outfit7 announced plans to grow its MAU to 470 million players over the coming years by expanding its portfolio outside of the Talking Tom & Friends franchise.

One year on: How Talking Tom Hero Dash continues to draw in 39 million players a month