Ubisoft Milan: We want to be the new Rare

Fresh off the success of Mario and Rabbids: Kingdom Battle, we sit down with Ubisoft Milan’s top brass 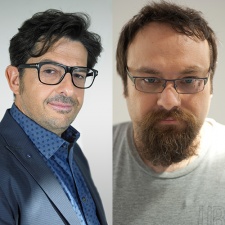 This article was written by Alex Calvin, Editor of our sister-site PCGamesInsider.biz.

By the developer’s own admission, 2017 has been a rollercoaster year for Ubisoft Milan.

Though the studio was founded back in 1998, for the last 19 years, like many Ubisoft outfits, the firm has been tasked with assisting on projects.

Ubisoft Milan has worked on pretty much all of the French publishing giant’s IP; from Rayman to Splinter Cell via Just Dance and Ghost Recon. It even had a hand in Beyond Good and Evil.

But that all changed at E3 this year when the team’s latest project, Nintendo Switch exclusive Mario and Rabbids: Kingdom Battle, was unveiled.

“It's been an exciting year, with a lot of pressure. First, we were waiting to see how successful the Switch was. That was the first issue,” general manager Dario Migliavacca (main image, left) tells PocketGamer.biz.

“We were confident [it would do well], but you never know. This was the first great moment, seeing how Switch performed because our game was entirely linked to that. Then we had the announcement at E3, which was probably the first moment we realised how great the game was, once everyone got to see it. Especially just after the leak, that was a bit annoying.”

The announcement at E3 was probably the first moment we realised how great the game was.

Creative director Davide Soliani (main image, right) adds: “We didn't announce the game until very late in the day, which is something that I like. Not presenting the game two years in advance meant we can keep the surprise.

"Our intention was to keep the surprise until E3, but the game was leaked. So after the leak, it was quite hard on the morale of the people working on it. We really believed in the game, we were so passionate about it, and of course the first reaction from people seeing the key art wasn't exactly positive.

"At E3, we didn't know what people would think about the game. But after that, with Miyamoto on stage, people seeing the game for the first time in motion, and people playing the game... there were queues for six hours, and people were still happy about playing the game. Now that the public knew what the game was, they would probably like it. It's been a rollercoaster.”

To date, the team at Ubisoft Milan is happy with the game’s performance, but the developer also has high hopes for its Japanese release later this year.

“So far the game is performing very well,” Soliani says. “We are looking forward to seeing the launch in Japan because that'll be another big step for us.”

One notable thing about Mario and Rabbids’ announcement, and Ubisoft’s conference in general, was the human touch. Where Sony and Xbox seemed content to have a cold procession of trailers and staged gameplay demos, Ubisoft put its creators front and centre.

Soliani, for example, was in the crowd and visibly emotional when Mario and Rabbids was revealed. It created a human connection with the product.

The human part behind the game is important.

“This E3 was a great show for Ubisoft because we had no presenter,” Soliani says, referring to Aisha Tyler not hosting the conference this year.

“We had people from the dev teams not spending an hour speaking about the game, but introducing the projects, saying a few key things, and showing gameplay. That's what players want to see. The human part behind the game is important. For me, having Miyamoto was amazing; I almost collapsed.

“Those cannons Yves and Miyamoto had on stage were the first models for the guns, and they weight 5kg. We were worried about them using them for a bit. But they had fun. It was a very light-hearted moment. Players felt that vibe.”

Right now, Ubisoft Milan is arguably the hottest name in the Italian games industry. Though demand for interactive entertainment in the region is strong, there is little in the way of development houses.

While Soliani and Migliavacca say they are proud of their studio’s place in the market, both explain that there is still work to be done to help the region’s games sector grow.

“One of the main pillars for the industry growing is good economic conditions, so tax credits [currently in approval stage with the European Commission] are healthy for sure,” Migliavacca says.

“Education is the other pillar. Universities and schools are investing more in our field. There are some good courses in Italy now; there are also companies like Digital Bros investing in an academy. So we are really open and already doing that to support these companies and the universities that want to invest in the industry.”

We are adding staff from everywhere in the world, which is key. Diversity is strength.

But Soliani sees it in reverse; that the games industry needs to help the government.

“Now the government is finally starting to move. We need more International collaboration. If you look at the movie industry, even for super huge important movies, you have a lot of people coming from everywhere; UK, Spain, Italy; it's key for me to open up development.

"We're not just hiring Italian people, we are adding staff from everywhere in the world, which is key. Diversity is strength. We had people from LA, China, Japan and Spain helping out [on Mario and Rabbids]. The final part is tax credits. You can see it from Ubisoft Canada; it's really helping the company having government support.”

Looking forward, Ubisoft Milan wants to grow. The firm currently has 20 spots available - with applications for this round of hires being mysteriously much higher than previous ones.

But while the studio is going to get bigger, the team wants to retain its ability to create interesting and innovative experiences. Soliani, in particular, has lofty goals.

I was saying to the team that we should be what Rare used to be for Nintendo many years ago.

“When we started this project, it was just five of us,” he says. “I was saying to the team that we should be what Rare used to be for Nintendo many years ago. I grew up playing those games, so in my dreams, the studio should grow and offer things that are very quality-orientated. That's my vision.”

“It's not a joke, but I can say that I would like to see other big international groups investing in Italy,” he says.

“It will be tough for me, because of the competition, but it could mean that they saw our example and could follow it.”