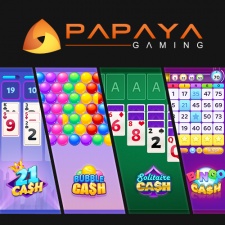 Win real-world cash for playing video games. With such a simple and direct hook for players, it seems it should be easy to create and run a successful skill-based mobile games company.

However, like many other areas of the rapidly evolving global games market, consumers are far more discriminating, demanding and looking for a more engaging experience than simply getting the opportunity to win money.

Papaya Gaming is a pioneer and one of the leaders in the skill-based gaming sector. The company has spent the last several years building a successful and growing community of engaged, earning players with its focus on innovation, simple, accessible casual games, all with a skill-based twist.

The company has experienced 2000 per cent growth over the last 18 months, while its two leading games, Solitaire Cash and Bubble Cash have been downloaded over four million times from the Apple App Store, with high ratings (4.7 out of five stars) for both titles.

The company attributes its success to a number of factors and the overall experience it delivers to players, outside compelling gameplay and cash prizes.

The choice of game is a key factor in creating a successful skill-based game, according to Papaya. The company has so far released two titles - Solitaire Cash and Bubble Cash, both of which are based upon simple, accessible and very widely known game styles. The familiarity of the gameplay, controls and mechanics, provide reassurance to potential players that the skill-based aspect will be easily understood.

This enables the company to engage with a casual audience and offer them the excitement of giving their existing games experience and new context. The company is now working on two new titles, Bingo Cash and 21 Cash. Both of which follow exactly the same principles.

Bingo Cash takes the popularity and familiarity of the game and makes it accessible and rewarding to players worldwide. 21 Cash will offer a combination of classic blackjack along with elements of solitaire, creating an entry point for new players, as well as a new twist on Solitaire for the existing audience.

Alongside the creation of familiar and accessible games, a major part of Papaya’s approach to creating successful skill-based games is the company’s focus on its community. For many casual players, the game is only one part of the larger meta experience, which enables them to connect with other players on a social level and spend time with them outside the core game.

Papaya has spent a great deal of time ensuring that not only do its games offer social elements, player matching, collectables and friends, but that all of these aspects are reflected within the wider community. Spread across several key social channels, the company provides a range of meta-features (such as weekly raffles), while encouraging and supporting the community to post and participate in activities unrelated to the core games - such as favourite recipes, jokes, crosswords, etcetera.

By providing a welcoming environment and a wider, more engaging experience for players, the company has found that they can increase the ‘long tail’ for their games and keep consumers active on an ongoing basis.

It may come as a surprise to some, but skill-based games are not gambling or sports betting. The focus on skill means that players are incentivised to improve their own abilities, while Papaya works hard to make sure its games are playable, fun and compelling in their own right; rather than the focus being upon a potential payout.

The vast majority of mobile games on the market only offer the opportunity for users to spend money, whereas Papaya offers the potential for ‘two way transactions’ in which money can flow back and forth between player and publisher far more readily.

This approach enables the company to focus upon the player and has seen it achieve notable success and growth in several key emerging regions around the world, as well as many of the more established mobile markets.

Papaya’s unique approach to its games, its business model and its audience, is in part due to the company’s diverse background. Since it was founded in Tel Aviv in 2016, the company has built an ‘all star’ team, which has pulled in people from across the digital technology, interactive media, and videogames industries.

This has enabled Papaya to utilise the key skills, engagement techniques and focus on user experience from all of these different sectors and create an approach entirely of its own.

Papaya’s ongoing success and audience of appreciative users show that there is a different approach to the market, built upon trust, credibility and an appreciation of every player.

Evolution, engagement and excellence – how Dice Clubs’ focus on players has shaped the game’s success