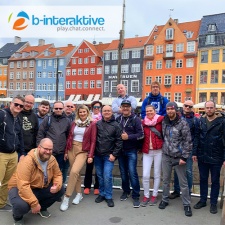 B-Interaktive was founded in 2011 by a small group of experienced game developers, with the goal of creating a new kind of studio, focused on a new type of games.

The founders identified three key areas for the company to focus upon, which they believed would enable them to create a unique approach to games, and find a loyal audience within the rapidly evolving global mobile market.

The key pillars for B-Interaktive are:

As the company celebrates its 10th anniversary, B-Interaktive has held true to the vision its founders established, which has helped the company to grow and find ongoing success. The company now has a multicultural team of 16 people, speaking six different native languages, working across offices in Germany and Poland.

The company’s focus on players and reaching a global audience has paid dividends over the last 10 years. B-Interaktive has released the hugely successful social title, Dice Clubs – a modern version of the all-time classic.

The success of Dice Clubs shows that our focus on players was correct...

Dice Clubs has achieved international success. Based upon a simple, accessible mechanic and instantly recognisable gameplay, the title enables players to compete head-to-head, in arena battles or as part of a league. Players can also create their own ‘club’ and invite friends and family to compete in their own space.

To date, Dice Clubs has been played over 100,000,000 times, has been translated into over different 10 languages and has an average daily play time of 77 minutes.

As it enters its second decade, the company is still focused on its core pillars and helping Dice Clubs grow into an ever larger, more successful experience for its global community of players.

B-Interaktive recently joined GAME, the German video games industry association, to ensure the company is positioned to maximise the potential of the ongoing growth and value of the mobile games market.

"Our first 10 years has enabled us to realise our vision for the company and build the sort of games we always aspired to," B-Interaktive founder and managing director Eugen Barteska tells PocketGamer.biz.

"The success of Dice Clubs shows that our focus on players was correct as was the value of building an engaged audience around the world. As we step into the next decade of B-Interaktive we plan to continue to focus on our key pillars, grow the global audience of Dice Clubs, and ensure we build upon our success within the growing global mobile games market.

"By joining GAME as a full member, we can bring our experience and expertise to the organisation and be an engaged and effective part of the next 10 years of mobile games.”

Dice Clubs can be downloaded from both the Apple App Store and Google Play.

A decade of Dice Clubs with B-Interaktive

The art of improving your community engagement

Want to boost your game’s ROI? Tap into your community