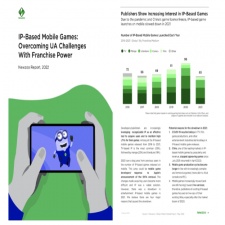 Games based on established franchises are on the rise. According to a report from Newzoo, a provider for PC and console games analytics, IP holders often choose mobile as their go-to platform for bringing beloved franchises to gaming.

To shed light on how IP-based games perform, Newzoo analyzed 650 IP-based mobile games based on data from their partner Airnow, of which 510 were active on the Apple App Store and Google Play as of 2021.

Newzoo conducted a consumer survey across key mobile markets, the US, Germany, Japan and China, to determine the perspective of mobile gamers toward IP-based games on mobile and found it had a positive impact.

In addition to this positive impact, the firm discovered a strong IP is vital in attracting high spenders, gamers who spend over $25 per month on mobile games, potentially leading to higher revenues for IP-based mobile games. Newzoo's consumer insights in the US, Germany, Japan and China suggest high spenders and average spenders, gamers who spend between $5 to $25 a month, are more likely to download a game that is based on an existing franchise or IP/universe of their interest. Meanwhile, high spenders are now 2.84 times more likely.

More headlines from the analysis show:

The biggest and fastest-growing gaming market is still the mobile games business, which continues to exceed PC and console gaming. The mobile platform will account for 53 per cent of the global games market revenue by 2022.

Other recent findings this year by Newzoo revealed the mobile industry is growing rapidly. They revealed territories with mobile-first growth markets are set to see solid growth, with a 10.8 per cent increase in the Middle East and Africa. Further reports detailed that 59 per cent of gamers in South Korea play on mobile.

Newzoo: Over 46 per cent of all “gaming enthusiasts” are women