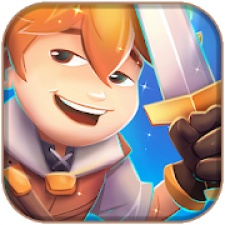 Cameron Roberson: About a year ago, in the early stages of Clicker Knight's development it was just me working on it. I temporarily hired an artist who I met through Reddit, but we had a falling-out and I continued along by myself. After I found the amazing artist (cant stress that enough) I am currently working with, through seeing his art on Instagram , I formed an LLC titled, Burnt Games. Now it is just the artist and myself finishing up the game. I do the programming, game design, animation, and some UI/UX design (not the art though). The artist does art, most of the UI/UX, and is also able to make trailers and animations as well!

My inspiration for Clicker Knight comes from three Idle Games in particular: "Cookie Clicker", "Tap Titans", and a lesser known title "Clicker RPG". They were the first Idle/Clicker games I really got involved with, and I decided it would be a fun project to tackle and that I could put a unique spin on it. I was not aware it would become this big of a project though haha.

My artists inspiration for Clicker Knight comes from Sword in the Stone by Disney. He loved the simple look and colors of the costumes in that film. Since the game is kind of a Knight Adventure, my artist went through all kinds of Medival art, Swords, and all those creepy monsters in the Fantasy realms. He even used a documentary on Knights for some reference.

The latest project we pitched at the competition was Clicker Knight: Idle Incremental RPG. As you can see from the title, its an Idle game, but we took a unique twist on the genre. The gameplay mainly consists of tapping on the screen, but the game really shines with its loot system, and optimization of your hero. Periodically you will find armor chests which contain an armor piece, its up to the player to decide whether or not they will want to equip or sell the armor. When the armor is equipped, it modifies your players attributes and physically changes the appearance of your hero! That is something not seen in a lot of games of this genre.

Also, as your hero progresses throughout the game, he will gain levels, and be able to put points into specific stat areas (Attack, Health, Magic) and various skill trees. Each skill tree is different, and many optimal routes can be taken. There are also several different worlds to explore, bosses to fight, and potions to brew!

My situation is a bit different than most. I worked on Clicker Knight, nights and weekends, and any day off that I could. So, I was supporting myself with my day job. Now, I am working on it full-time and living off my savings because it is near release. My previous 2 games were not successful at all, so I was not hoping to make much of a living from Clicker Knight, but then I found an amazing artist, and was picked up by a publisher after posting on Reddit. Now I am way more confident in its success- to the point where I believe I could survive from it for a few months after its release.

That being said, I think its very difficult to survive solely as an Indie Developer. It's an art skill like any other, and you need to practice to become good enough to survive. It's not a hobby or job that will start paying right away as many seem to believe. Even though my first two titles flopped, I have learned a lot from those titles that enable me to make a better, more successful games in the future. After Clicker Knight is released, I will truly know how difficult it is to survive as an Indie Dev.

I thought the Big Indie Pitch was awesome! I really enjoyed meeting all the participants, and the judges. Every judge had unique questions about the game, so you never knew what you had to answer. It really kept me on my toes, but also showed areas I could improve upon as well. I also got a lot of interest from publishers and advertising agents. Overall I thought the event was well organized, and Simon did a great job managing it. I was thrilled to have a table to display my game as well. That has always been a dream of mine.

I gained insight into what publishers are looking for in a game. Also, I had never pitched a game before, so it was a great experience learning how to write a pitch and to present it. I hope to gain more pitching experience, and work with more publishers. I would love to try again with another title and get first place!

For Clicker Knight, my first step would be building a community who loves playing the game. Through that community I hope to improve it in ways they want to make it the best game possible. After Clicker Knight I do have a few ideas. One is a metroidvania type idle game, where the player progresses through the game to collect parts for his ship, and then uses the ship to upgrade his character. Another is an arcade style RPG where you shoot your hero like a pool ball! Though, they are just ideas for now.