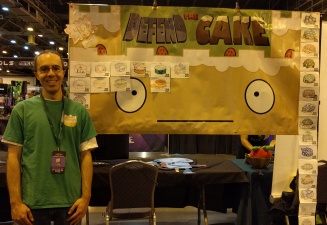 Today, we're speaking to Justin Klinchuch from Defend The Cake, who submited Defend The Cake to The Very Big Indie Pitch at Pocket Gamer Connects San Francisco 2018 and walked away as the winner!

Justin Klinchuch: We are a three person team consisting of Naomi Yee, Toli Carter, and myself. The inspiration for the game happened while Naomi and I were carpooling to our former jobs at Blizzard. We would talk a lot about our shared interest in indie game development, and one day she told me about an idea she had for a fantastical food kingdom with castles made of cake, which was largely inspired by the photography of Carl Warner.

We are both huge fans of tower defense, and I had been wanting to make a tower defense game for a while. I was disappointed to see how most of the tower defense games that were coming out eschewed their strategic roots in favor of grindy pay-to-win progression systems, and I wanted to make a game that highlighted the more strategic aspects that caused me to fall in love with the genre. Shortly after I left Blizzard to begin work on Defend the Cake full time, Naomi brought in Toli, an old friend from their days working together at Riot. Toli is also a huge fan of strategy games, as well as cooking and baking. He refined our initial scattered ideas into a cohesive visual style, and really brought the game world to life.

Defend the Cake is a cute and tactical tower defense game about defending your castles made of cake from bugs that are coming to steal slices of it. One of the main things we focused on with Defend the Cake is the mechanic of ‘mazing’, or shaping the path your enemies take. We handcrafted every level to be a unique puzzle for you to find an optimal way to construct your defenses. To that end, we also came up with the unique mechanic of letting you place your cake castle anywhere you want on the map.

While strategic depth was a big focus for us, we also wanted to make the game as accessible as possible. “Easy to learn, difficult to master” was something that really got drilled into my head during my time as a designer at Blizzard. For instance, even for experienced players it can be quite challenging to beat a level without any bugs touching the cake, but we made the game forgiving for more novice players by making it so the bugs have to carry their slice of cake all the way back to their spawn in order to steal it. We also feel that our cute art style is more approachable for people who aren’t as familiar with the tower defense genre, and we hope that our unique style is a breath of fresh air for veteran players who are craving something new.

It’s definitely challenging! For small developers such as ourselves who are releasing their first indie game, it’s very difficult to get noticed. So rather than bet everything on the first game, I’m focused on a longer term strategy of developing a fan base over time. While the common wisdom seems to say that there’s no money in mobile premium games, I disagree. I know that this is a harder battle to fight, but I also think as an indie developer it’s imperative to build a reputation on making quality experiences that don’t attempt to manipulate players into wasting their time and money on the latest treadmill.

Every time I’ve gone out and shown the game, I always have a ton of players tell me how much they love the fact that we have no ads or in-app purchases, and that they wished there were more games like that on mobile. I think more and more people who never spent money on games prior to owning a smartphone are now demanding games that are balanced to maximize fun rather than maximize ad views and IAPs. Over time, I think there will be increasingly more room on mobile for quality premium games that are respectful of their players’ time and attention.

It was intense, but a lot of fun! Getting people excited about your game and fielding their questions within the span of just a few minutes is challenging, but doing so many pitches back to back like that is also a great way to refine the pitch. Each new table was an opportunity to tweak and iterate the pitch a little, and test those changes against a fresh audience.

I think this experience has definitely helped me refine my pitching skills. Winning the competition was a nice morale boost as well! When you’re new to the indie scene, getting attention for your game is tough, so when other industry veterans tell you that you have something special, it’s definitely validating. I know there are plenty of players out there who are hungry for a unique spin on tower defense, and I hope this will help us get the word out to more of them.

We’ve been working on our 2.0 update for Defend the Cake over the past couple months which adds 3 new bonus levels as well as some additional polish. We’ve also been working on a new turn based strategy game, but it’s still early in development and I’m not quite ready to talk about it yet. We hope that as people discover our game, they rediscover their joy of tower defense through our unique spin on the genre. It would also be great to see more players beat our high scores!

The best of The Big Indie Pitch 2018 - Defend The Cake