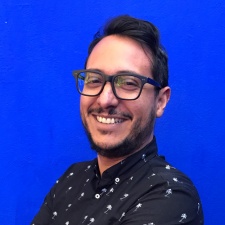 In today's Speaker Spotlight we're talking to Doppio Games co-founder and CEO Jeferson Valadares who will host a talk entitled 'Voice Games – An Overview Of An Up-And-Coming Category'.

Valadares is CEO and Co-founder of Doppio Games, a voice-first game studio based in Lisbon, Portugal. He was also the lead designer on the studio's debut title The Vortex, available for Amazon Alexa (and coming to Google Assistant and smartphones).

In past lives he was VP/GM of mobile at Bandai Namco, studio GM at Electronic Arts and executive producer at BioWare in San Francisco; Studio director at Playfish and creative director at EA Mobile in London; and game development director at Digital Chocolate's Sumea studio in Helsinki.

Since it's a start-up, pretty much everything? Most tasks are shared with Chris, the other co-founder. Product-wise I focus more on design and production.

Playing games and reading were the two most popular things I did growing up, so I'm honoured and delighted to be able to create these experiences for the next generation!

Find a way to make your first game as soon as possible! Even if it's just a clone.

As an entertainer, I love it that more people than ever are playing games worldwide! And as a developer, I'm also very pleased to see that are making inroads on perennial hard topics such as work culture and taking more responsibility over the societal impact of our collective design decisions.

More disruption. More stores, more platforms, more ways to play. It should be an entertaining time for both consumers and game makers.

In almost every way! But if I had to pick one, it's the fact that in the beginning, it was very hard to do anything unless you were in the US, UK or Japan. But these days you can reach people from anywhere.

The content is always top-notch, but my favourite part is to hang out with people during the breaks. The personal connections always give you another layer of experience.