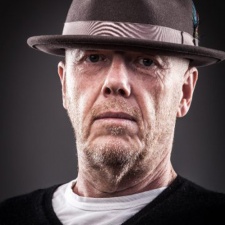 Verchere is a long-time game industry executive, creative producer, game director, writer and visual artist. He has been involved in the creation and production of some 40 video, computer and mobile games.

Over 32 million people have now downloaded Red Bull Air Race, Bike Unchained and Snowboarding The Fourth Phase for their mobile devices. Millions more have played SSX Tricky and NBA Street V2 on their consoles and the classic, best-selling Sega Genesis title Beavis and Butt-head for MTV.

A former professional skier and alpine coach, Verchere graduated with honours from the Emily Carr University of Art and Design in 1989. He was one of the founders of Radical Entertainment and served as studio creative director until he left in 1998 to join Electronic Arts (Canada) as a producer.

Verchere sold his first feature screenplay, Mom’s Cookies (co-written with Douglas Coupland), to Buena Vista (Disney), and is a member of the WGAw. In September of 2016 he co-founded Session Games, a production company specialising in creating, delivering and operating original games.

Over 32 million people have played Bike Unchained, Snowboard The Next Phase, Red Bull Freeskiing and Red Bull Air Race. Our mission is to own action-sports on mobile and Switch.

We want to be successful so we can make games we want to play ourselves. All of the Session co-founders are creative and entrepreneurial and have professional sports backgrounds.

As CEO, I leverage my network and experience to bring in new projects and new resources.

I love games, and I love competition. I was coaching ski racing in Japan in the late '80s and became exposed to the electronic entertainment industry there.

I blew up my knee, learned how to animate and found a job as a pixel artist in a company that eventually became EA Canada. 2019 is my 30th year in the industry and I'm still learning.

Be a generalist and develop your creativity, communication, and independence. If you're too specialised, you're fungible. Also, don't just play good games. Play bad games too. You can learn a lot from them.

The tide is turning against rapacious F2P mechanics and I think the clock is ticking a bit on loot boxes and other monetisation mechanisms that feel predatory or out-of-context.

I predict that predictions will continue to make people look silly. However, I do think that some of the new models that transformed traditional media (streaming music and television) will make their presence felt and I can see subscription in some form or other making a comeback, especially in F2P.

My first day of work in the industry, I was plopped at a desk and left to configure a new 286 PC. Then, using DPaint, at 320 x 200 pixel resolution, model only one-half of the rear-end of different high-performance automobiles that looked like specific cars but made different enough so as not to draw a lawsuit.

The half-car was then "h-flipped" to make a complete sprite and that became your opponent. Now, Red Dead Redemption 2. If you want me to fill in the blanks, you'll have to read the book I'll write when I retire.

Honestly, it's the networking. The talks (mine included) form a nice framework for the whole thing, but really it's walking the floor, and engaging in person with those otherwise disembodied voices over Skype and Slack in the flesh.