"We’re really keen on AR and we’re seeing a lot of the big partners release a lot of products in this space, and we’re excited to see where it’s going" 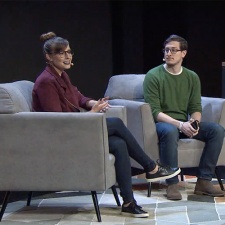 Unity is investing heavily into both virtual and augmented reality as it looks to enable developers utilising the tech both in and out of the games industry.

Unity has already been used to develop AR games such as Niantic’s Pokemon Go and Ludia’s Jurassic World Alive.

But it wants to become a key partner for even more developers as it seeks to become a leader in the emerging technologies.

"A lot of opportunities"

As part of that mission, Unity has developed the AR Foundation, a toolset that lets creators build apps for both ARKit and ARCore through one platform. But it has a number of other tools powering AR development.

“We’re really keen on AR and we’re seeing a lot of the big partners release a lot of products in this space, and we’re excited to see where it’s going,” says Unity XR evangelist Dan Miller.

“I think there are a lot of opportunities today and as these platforms evolve there’s an increasing need for developers to really build things out. I think you can already see that right away on the gaming side with Pokemon Go and more on the utilitarian with things like Ikea Place how much opportunity this really has.

“And then at Unity, similar to on the VR side, we’re investing heavily to make sure to support and really enable developers to build these apps as easily and as seamlessly as possible.”

Market research firm Digi-Capital has predicted the AR market to grow much larger in terms of revenue than VR by 2022.

But VR doesn’t have a billion-dollar hit like Pokemon Go providing the foundation for high sales figures. Despite the success of Niantic's hit, Miller believes much of this anticipated growth will actually come from outside of the gaming space. There have been other AR games that could be considered a success, but they've not hit anywhere near Pokemon Go's levels.

Noting Unity’s expansion into other industries, Miller says he’s seen various utilitarian use-cases such as visualising the construction of a building before it's completed or producing an overlay for medical procedures when surgeons are practising.

“I think that’s where this opportunity and where these numbers are coming from, AR's starting to use these to enhance some of our professional activities or where you’re looking at maybe a hands-free head-mounted display or just visualising furniture and stuff like that," says Miller.

“So I think that’s where - besides some breakout games and things like that - we’re seeing this industry trend towards.”

Unity, of course, wants to position itself right at the centre of AR’s growth.

“In general Unity is looking outside of gaming and we want to be there to enable these new platforms and new industries,” says Miller.

“I think right now just because of the ubiquity of how many people have these AR-enabled devices in their pocket, there’s still a lot of opportunity in the present and near-term future to be able to utilise that," says Miller.

“...I think there’s definitely a lot of use cases for what we have today and that portability and affordability provides a lot of opportunity on the mobile front.”

Check out more of our GDC 2019 coverage right here.