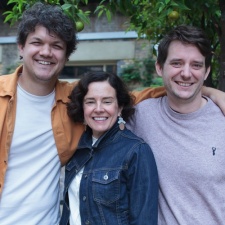 Ustwo Games has a special place in the industry. It develops critically acclaimed mobile titles that are also wildly successful.

As the studio’s newly titled chief creative officer Dan Gray once put it, the team's approach to Monument Valley was: what would an internal first-party game from Apple look like?

The company has gone on to develop other titles such as virtual reality adventure game Land’s End and Monument Valley 2. Previously focused on one title at a time, recent restructuring has seen it effectively split the studio in two for multi-game development.

Ustwo has brought in former CCP chief customer officer and EA senior marketing director Maria Sayans as its new CEO, while Peter Pashley has taken on the new role of chief development officer, and Gray has been given the aforementioned title chief creative officer.

The team is currently at work on Apple Arcade subscription game Repair and another, unannounced, title.

There’s an old adage that, if it ain’t broke, don’t fix it. So why does Ustwo feel the need to make changes now?

“We're very different now than we were when we were eight people sat back to back making Monument Valley,” says Gray.

“As we got a little bit bigger, I mean we're not huge now by any means, I think that I spent so long juggling so many plates, that I just wanted to concentrate on one.”

The studio’s first chief exec, Sayans had already been working with Ustwo Games as an advisor since September 2018.

Over the last six months, Gray analysed where it is he wants to spend his time and where he thinks he can do his best work, and realised that was on the creative, game development side.

While he hasn’t exactly abandoned that role over the past six and a half years as the studio has grown, his attention has been stretched.

“I think when you meet the perfect person and you come to terms with the things that make you happy, it kind of turns into a bit of a no-brainer,” he says.

Sayans says that the vision for the company is to continue making “beautiful games” that take the medium further. The change, she says, is to create the conditions so that the team can create more games.

“It’s all about supporting and creating this space for Dan and Peter and the rest of the team to do creative work that's unique and that stands in its own place in the industry,” says Sayans.

“I think that this isn't something that is coming from ‘let's go and shake things up and change everything that Ustwo is doing’. Ustwo's been extremely successful and Monument Valley 1 and 2 are references for what mobile games can be, and Land's End really was a very innovative game in the VR space as well.

“But it's really difficult to make games. I've been in so many rooms in my life in games where you see wonderfully, creative people that should be thinking about making games but instead are thinking about business models and monetisation, and so much energy and passion is drained from going into that.

“I think as Dan and I were spending more time together over the last few months, it just became clear, and as a natural kind of next step, that this was the way that we wanted to go forward.

“So I wouldn't see this as a radical change of where Ustwo is going, but I think about it as strengthening the pillars of what makes Ustwo special so that it can continue to be very successful.”

When asked why Ustwo is moving into multi-game development rather than just focusing on one title like it classically has, Gray jokes that “some people say that we take ages to make things”. But a few of its team members come from a background where games can take years and years to develop.

I wouldn't see this as a radical change of where Ustwo is going, but I think about it as strengthening the pillars of what makes Ustwo special.

For Gray, there are two reasons for the change. He wants the team to be able to take risks while also giving people “room to breathe" for their own personal development, and give employees more ownership over things.

There’s also a flexibility it gives the studio, whether it wants to create a sequel, a new IP or an update to an existing game. An extra team opens up new options the team didn’t have before.

“I think what it should be able to do is we should really be able to kick it up a notch so that we have something from Ustwo Games every year. That’s the goal,” he explains.

“I think two is a really manageable state for us without seeming like a huge company, and those teams themselves might only be eight to 10 people big. I think it's a good way for us to get more regular releases out and just keep surprising people with new stuff.”

For a studio that releases distinct, premium experiences that all share the Ustwo style, it’s perhaps surprising that there is no specific creative framework through which ideas are pitched and then sent into production.

Gray says that like with most small companies - Ustwo now employs 25 full-time staff, with plans to hire a few more - the creative process has changed every time the team has gone through it.

The studio has previously empowered staff to pitch an idea, and if there was interest, they would be given resources and up to a few weeks to test it. The process though can change depending on the people and the situation.

He stresses that the one core principle of the team that stays the same is to not always have one director who decides everything and comes up with all the ideas. He wants colleagues to challenge his ideas and the direction of a game.

“Ensuring we have that good creative debate is part of Ustwo Games,” says Gray.

“So when we're prototyping, people will be coming up with ideas, people will be questioning other people's ideas, and sometimes we'll mix the resource and people on a project in order to kind of spark some uniqueness.”

Ustwo doesn’t have big plans to completely change the kind of games it makes. Sayans says the “secret sauce” of Ustwo Games centres around the “contained experiences” it develops - games that have an ending.

It means that people like myself get to spend more of their time making cool stuff instead of doing spreadsheets.

Gray is open to other business models outside of premium - the studio already has Repair in the works for the Apple Arcade subscription service.

He explains that the teams pick the business model after they come up with an idea.

“Maybe we'll do a whole host of different things in the future,” he says. “I don’t know.”

Ultimately, Gray adds that it’s still a founding principle of the team to “make games with heart and personality".

“It just happens to be that we're making two now instead of one,” he says.

“And it means that people like myself get to spend more of their time making cool stuff instead of doing spreadsheets. So I think I'm just excited for the future and what that can bring.”

Sayans adds: “And I'm excited about the spreadsheets.”