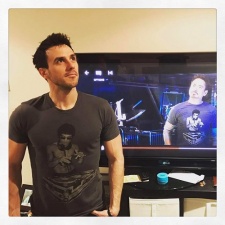 Jay Foreman is the level designer at King's London Studio.

Jay Foreman: I’m a level design craft lead for King based in our London studio. I manage a team of level designers working on match-three casual games here in London, while also working across our global network to keep King’s level design at the top of its game.

The main tasks there are working with level design teams across our studios on how we can future proof level design at King, how we can improve tooling and processes and how we can keep our staff engaged as well as stilling having room to grow.

Overall it’s about maintaining the quality of our content to keep King’s position in an increasingly competitive market.

My route into the industry was a unique one. In 1990 when I was eight years old, I was gifted a Sega Master System by a friend. I remember playing Super Hang-On until it felt like my fingers would fall off. From then on, I knew I wanted to do something with video games.

Later when I was 15, my school sent us to a career advisor who helped you choose what to do at college and prepare you for adult life. When I mentioned I wanted to make video games I remember her laughing and saying: “I’m sure you do... but let’s pick something that you can study for.”

There were no courses in video game design at that time. So after studying a bachelor’s degree in Biomedical Science, alongside working countless jobs in laboratories, supermarkets and restaurants, I landed a role as a constable at Kent Police force.

It was a good job with a nice social circle and things were comfortable. However, everything changed once I played World of Warcraft. I fell in love with the world, the culture surrounding it and this re-ignited my passion for wanting to create experiences and to be part of this amazing industry.

I was already creating maps in Warcraft 3 and making tabletop scenes for Warhammer 40k. Then I quickly realised that I was content in my current job but not truly happy.

After consulting with friends, I applied for any role I could find at Blizzard: QA, game tester, designer, community manager, customer service – you name it. I must have sent out over 40 applications over the course of six months, each with a tailored cover letter.

Eventually, I was invited to Paris for a customer service role. Suddenly I’d gone from policing the streets of Kent to policing the mean streets of Stormwind as a game master for Blizzard. I stayed with Blizzard for five years and loved every moment, though I missed the UK.

An old Blizzard friend approached me and suggested this up-and-coming mobile game company called King. I gave it a shot and was blown away by the welcome at the interview.

Everything from the values to the culture completely aligned with my own and the future of mobile games was seemed so exciting. I moved to King as a community manager, where here I was given the chance to indulge in my design passions.

What did you study (if anything) to get your role? What courses would you advise for aspiring designers?

I studied Biomedical Science but if I was given the chance to reverse the clock, I would study one of the more focused degrees surrounding games. Something like game design or computer science which are way more tailored to helping people get into the industry as a designer or programmer.

I think there’s still a lingering misconception that making games is for men and all gamers are male.

Saying that, at King we have employees who come from incredibly diverse backgrounds so there is no single way to get into the industry.

The UK has great universities with top-notch design courses. For the past four years, King has employed interns and junior developers/designers/artists who were students of such universities, as they have been set up for success through their schooling.

Once I was on the tube on route to work, where out the corner of my eye I spotted a woman playing a level that I’d created for Farm Heroes.

Each time I looked up she was still on the same level, continuing to fail. Just as she got off the tube I noticed her complete the stage and I can honestly say I was way happier than I ever thought I would be seeing a stranger play a match-three game on their mobile.

For a brief moment, something I designed kept someone happy, engaged and entertained on their everyday commute.

I think there’s still a lingering misconception that making games is for men and all gamers are male. This then means that the majority of experiences historically were not tailored for women, leading to the industry having fewer female applicants for roles in the craft.

Thankfully this is changing and many companies in the industry - including King - have made great strides towards getting more women into creating games, by showcasing that programming and designing games are not gender-specific.

One way the company does this is by offering a two to six-month scholarship for female students, with a trip to GDC for those that are successful, and a chance to intern with us.

I wish I knew earlier that innovation does not have to mean reinventing the wheel. Some of the most innovative ideas I’ve seen at King been simply making our products more fun to play.

It sounds cliché, but simply don’t give up. If being in the industry is where you want to be, then make it your goal and spend your time and energy making it a reality.

Use your free time to indulge your passion. Learn how to script with x-code and learn how to use engines such as Unity. Both are totally free and have how-to guides on YouTube that can explain the basics to get you making real gaming experiences in no time at all.

Read a lot. I recommend The Art of Game Design which can help with learning about player motivations and many-core design principles.

Games are here to stay and mobile games in particular are still part of a young industry that is a creative, diverse and a joyful place to be. It’s well worth the effort to find your place in it.

How to get a job with King