Marek Rabas on his vision's validation 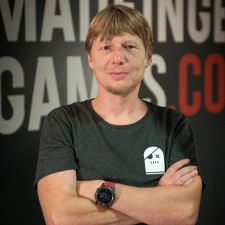 Nearly a decade on from the studio’s formation, Madfinger Games has made quite a name for itself.

Releasing numerous titles from Unkilled to Monzo to its Dead Trigger series, one particular franchise has brought success to the Czech developer.

Thanks in large part to Madfinger’s first-person shooter series Shadowgun, the studio has accumulated over 250 million downloads.

Initially launched in 2011, the game has grown in both scale and fandom, with two iterations following and a third currently in the pipeline.

But this wasn't the culmination of the studio's ambition.

Early in 2019, it started production on Shadowgun War Games, which will see the fast-paced mobile multiplayer FPS go head-to-head with some of the biggest names in shooter genre.

Our most ambitious project

During the hustle and bustle of Unite Copenhagen 2019, we caught up with Madfinger Games CEO and co-founder Marek Rabas to discuss the game and how the team is looking to handle the competition.

“After releasing Shadowgun Legends last year, which took us three years to develop and was a pretty ambitious project, we started focusing on other stuff,” said Rabas.

“We wanted to have a player-versus-player mode inside of Shadowgun Legends but we found out that it’s impossible to balance because there were too many skills involved.”

It’s an ambitious project; we want the best FPS competitive gameplay with the highest visual fidelity.

From this Shadowgun War Games was born and is still in development. Production began a little later than intended the CEO confesses.

“We decided around February that we will do it,” Rabas says.

“Now we have this demo that is polished and has the right balance of gameplay. We are also focusing on a lot of optimisation and battery-drain so we decided to start again with all these things to achieve super-fast loading times.

“It’s an ambitious project and we want the best first-person shooter competitive gameplay with the highest visual fidelity, while really tuning the control scheme.”

The ambition is clearly there to make Shadowgun War Games the pinnacle of what mobile FPS has to offer.

However there will be plenty of competition from the likes of newly-launched Call of Duty: Mobile, and the ongoing success of PUBG Mobile and Fortnite.

“I think we are pretty happy that brands like Call of Duty are coming to mobile because they have a lot of power to bring a lot of players to the FPS games on the platform,” says Rabas.

“I don’t think everyone will play Call of Duty: Mobile forever, so these players will try different kinds of games.”

“I hope people find a way to play our games,” he adds

Now Call of Duty is coming to mobile, it’s a testimony our vision nine years ago was correct.

“But we have always been competitive with the big guys since 2009. We are doing it again. These are the most challenging times but it’s motivating us to be better.”

Shaping up to the competition

One advantage Madfinger does hold over rivals like Call of Duty is its mobile-only-focus.

“It’s an experienced team; people that have come from the console and PC space, guys that have worked on triple-A games. We are still hiring these guys, super great guys that are working on mobile. Hopefully we will have some advantage because we are taking this skill and applying it to mobile.”

Rabas then goes back to speak about Call of Duty and what it means about the titan shooter coming to mobile platform.

“It’s not even competition, we welcome their entry,” he says

“Now that Call of Duty is coming to mobile it’s a testimony that our vision nine years ago was correct.”

As with most successful mobile game companies, Madfinger has relied on the free-to-play mechanic to generate revenue. Now that Shadowgun War Games has been confirmed to be going down the same route, we asked how the mechanic will evolve.

"As a designer I love it because you can change the game and can focus on the players and their emotions - you value the player,” says Rabas.

“It’s not like premium where players are buying the game based on the marketing material, not the experience. The people in the games are talking about investing when they find the value. You cannot fake them through marketing or videos.”

Free-to-play has evolved considerably over the years, with some questionable decisions being made surrounding them to this day.

“During the last eight years when it started there was some crazy things, like shady mechanics and psychological uses,” Rabas says.

“I think people should be very careful and responsible with how they use it. We are accountable for what we are doing with people’s emotions and how we are pushing. So, we will see whether there will be regulations. If people are abusing something there are always these regulations.”

As for the rise of subscription pricing, Rabas isn't impressed.

“I’m pretty scared of subscription. I think it will lead to bad things because people will try to consume games more, therefore they won’t value it as they don’t buy it," he says.

Shadowgun War Games currently has no release date but was confirmed for “winter” and before “Q2 2020. There’s even the possibility of the game making its debut before Christmas.

“It depends on the quality of the game and we don’t want to rush,” says Rabas.

“In this competition first-impression is everything, so we need to be sure the experience is perfect.”