"Generally, we set aside two days a month for jamming" 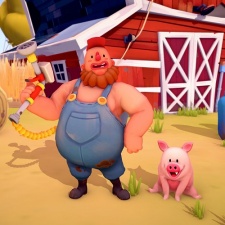 This week we spoke with Bossa Studios regarding the development and launch of Hogwash and why the studio felt Apple Arcade was the right place to release the title.

PocketGamer.biz: Can you start off by telling us about Hogwash?

Bossa Studios: Hogwash is a three versus one multiplayer game about a farmhand struggling to control three rowdy pigs that want to spread muck all over the farm. It's a family-friendly experience that's designed to be easy to pick up but full of opportunities for strategic mayhem.

Hogwash took seven months to develop with a development team of around 20 people.

Hogwash came from a Bossa Studios game jam, which is the cornerstone of our creative process. Their purpose is to generate new ideas that can form the seeds and foundation for further development.

Generally, we set aside two days a month for jamming. Members of the studio, from designers and programmers to finance and marketing, gather into teams by sharing ideas around and working towards making playable game experiences, all based on an agreed theme for that month. This is how games like Surgeon Simulator, I Am Bread, and Hogwash were born.

Hogwash took seven months to develop, with a development team of around 20 people.

Creating a new multiplayer IP with original gameplay was always going to be a challenge. Launching the game on four platforms in 17 languages within seven months was an even bigger one!

We had to have a laser focus on creating compelling multiplayer gameplay that featured a high level of visual quality. That meant being very strict with our scope which is difficult when you're a studio with such a propensity for wild creativity.

We had a prototype which had come out of a game jam prior to full production which validated the basics of the theme and the gameplay loop, so we already had an exciting core to hang the game on. However, it took almost all of the development process to bring all together and get it refined into a game we were happy with.

How did the deal come about to work with Apple and more specifically Apple Arcade?

Apple reached out to us with early details of Apple Arcade and we showed them Hogwash, which was still in its jam state at the time, but the fun gameplay and cute pigs were compelling enough even at that very early stage to be given the go-ahead.

We are very happy with the game's launch on Apple Arcade. Hogwash has found a promising home among the other great titles on there.

We've got nothing specific we can reveal right now, but we are always experimenting within our monthly game jams. These result in a huge output of exciting concepts, some of which would absolutely find a home on mobile platforms.

Bossa Studios has a history of being one of the first studios to develop on new platforms or invest in new initiatives, such as virtual reality, smartwatches, Apple Arcade and more. We aim to continue that going forward.