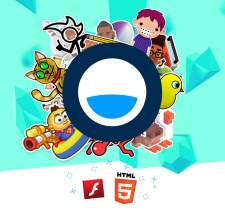 For some of us, Flash games were one of the first introductions to the world of games - short, silly titles played in browsers around the world, often built by hobbyists with a bright idea and some spare time.

The world has changed drastically since then, and now Flash games are a dying breed - not least because most modern browsers no longer support them. It's not been available on mobile for eight years since Android dropped it in its 4.1 release.

But not all hope is lost. Preservation efforts for Flash games are well underway, and web gaming platform Poki is significantly stepping up its own efforts by partnering with Nitrome, now a respected mobile studio, and adding 100 of the developer's old Flash titles to the platform.

To find out more about why it's preserving these games, we spoke with Poki co-founder Michiel van Amerongen and other members of the team - as well as Nitrome's Mat Annal - about the technical challenges of saving these games and why it's good business for everyone involved.

PocketGamer.biz: We last spoke with you around four years ago following the launch of Color Switch on your platform. How has Poki grown and changed over those four years?

Michiel van Amerongen: 2012 - 2016 was a challenging time for web games. The app stores had exploded, Flash was on its way out, but its successor HTML5 was still a niche game development technology.

The launch of Color Switch on Poki marked a tipping point: we had been experimenting with HTML5 as a cross-device game development technology for years, so we knew what it was capable of. But with Color Switch, we now had a first major game with proven app store success endorsing that potential as well.

It's amazing that these games are still attracting and inspiring new generations of players around the world.

That partnership paved the way for more collaborations with game developers big and small. Our playground has since featured a mix of some of the most successful games of the last decade like like Subway Surfers (by Kiloo), Crossy Road (Hipster Whale) and Stickman Hook (Madbox), right alongside true web originals like Raft Wars (Martijn Kunst), Life - The Game (Ohmaigawd), and Duck Life (Wix Games) that are reminiscent of the early days on web.

We're excited to be in a position where we're able to nourish that original vibe, while also tapping into the quality games that evolved with the mobile app ecosystem's success.

Why is the act of preserving older Flash games interesting for you?

In 2017 we hired Erik Sombroek, a former indie Flash game developer, to work on the developer tools side of our platform. Through his game developer friends we got introduced to Rob Bateman of Away Studios, who used to be a Flash PM at the BBC back in the day, and had started to work on a set of libraries that had the potential to run Flash content in modern web browsers.

Over the years we had been looking for ways to preserve the Flash classics that we grew up with. Quirky, diverse creations like Dino Run (Pixeljam), Tank Trouble (Mads Purup), and The Impossible Quiz (Splapp-me-do) that have been around for 10 years or longer. It's amazing that these games are still attracting and inspiring new generations of players around the world.

That's why we teamed up with Rob and invested heavily in the emulation of Flash classics, preserving titles one at a time while strengthening Rob's conversion technology AwayFL with every game supported.

For an example of what that looks like, here is a screenshot:

Here is a video showing the game on mobile:

Whats this?... oh nothing much just playing Bad Ice-cream on the browser on my phone https://t.co/PmzIi4gZil pic.twitter.com/gYumtCoksw

Or play it yourself here!

What you see here is a result of a fruitful collaboration: Nitrome released their Bad Ice Cream series on Poki, Away Studios did the conversion to HTML5, all glued together with the Poki SDK which provides the virtual touch controls on mobile devices.

We're thrilled to see that the partnership is a success both creatively and commercially: the new HTML5 version of Bad Ice-Cream achieving the #2 most played games rank on our platform just days after its release, which shows players are still appreciating this game in the mobile era on web.

Aside from keeping their games alive, how else does preserving Flash games on Poki help developers?

Unlike the early days of Flash (where selling licenses was the primary source of developer income) we developed a transparent rev share system that comes with a lifetime revenue stream for game developers that decide to preserve their game with us.

It's great for all of us that technology is catching on, enabling us to solve challenges that were so far hard to overcome.

Depending on the game, that revenue stream can be anywhere between a little and a lot; for us it's not just about the absolute numbers, but the idea that developers have a sense of ownership, that they are the ones to profit from their creation.

On top of that monthly paycheck, we also look for ways to improve the playing experience for end-users, for example through experimental Poki SDK features such as virtual touch controls on mobile devices.

We allow developers to customize the look 'n' feel of that virtual gamepad with custom graphics, or mod it with custom code. We prefer to look at our developer partnerships as a continuous creative collaboration, rather than a one-off publishing deal.

How did the partnership with Nitrome first come about?

Michiel van Amerongen: My co-founder Bas and I first met Nitrome's founders Mat and Jon in their offices in London in 2014. At the time Mat and Jon responded to Flash's demise by pivoting their game development business towards the mobile app stores.

They became very successful doing so, even as the app stores became more crowded. Nevertheless, the move did force them to leave behind their original catalogue of Flash games that made them famous in the first place.

It's great for all of us that technology is catching on, enabling us to solve challenges that were so far hard to overcome.

Mat Annal, CEO of Nitrome: Throughout the past few years we've been in touch with the Poki team every now and then to explore the possibilities of preserving our Flash games catalogue for web. So far, we had not been impressed by the solutions out there, as they were limited to more archival purposes.

The HTML5 version of Bad Ice Cream 2 is now here! Play it in your browser on PC or Mobile device here: https://t.co/vSXkbIin6V pic.twitter.com/vww9oxH88j

We feel the approach of Poki and AwayFL really stands out in terms of the quality of the experience for the players, letting them play the games in the browser online as they were originally intended. It is even possible to play the games in mobile browsers for the first time with the addition of virtual controls where needed.

The current solution empowers the developer by offering in-game monetisation and insights in revenue and player data, as well as the possibility to further expand on the game releases (e.g. by adding new levels) via their self-service developer platform.

Why do you think Nitrome's early Flash game catalogue is a good fit for Poki? And you're planning to launch over 100 Nitrome games on your platform. What is your plan for rolling these out?

Joep van Duinen, Head of Game Developer Relations: Nitrome's Flash game catalogue is a great fit since they offer a diverse set of games with a recognizable art style, and they're fun to play for a wide range of users.

For mobile specifically, the main challenge for us has been to convert keyboard controls into a good UX on a mobile touch screen.

Several of their IPs, including Bad Ice-Cream, Rubble Trouble, and Twin Shot have been amongst the most popular games on the web for years. We have always believed that the web is first and foremost about easy access: if it's technically possible to deliver fans around the world an instant Nitrome experience on any device, why strive for anything less?

We'll encourage our users to discover Nitrome's games and explore from there, going from one to the other, without having to install plug-ins or apps.

In terms of emulating, every other game comes with another bunch of technical challenges. But as we progress through Nitrome's catalogue, we'll at some point be in a place where Nitrome's frameworks and design patterns have been fully converted to HTML5.

At that point, Nitrome could even continue to use Flash as a primary development tool to release additional content packs for those games. Who would have thought that with Flash being sentenced to irrelevance by mobile way back, 2020 was going to be the year where it would again be used as a tool to develop mobile content?

How difficult has it been ensuring that these older games work on your platform? Are there any particular problems with making sure these games work on mobile?

Erik Sombroek, Game Tech Engineer: For mobile specifically, the main challenge for us has been to convert keyboard controls into a good UX on a mobile touch screen. By now we've done this for a dozen Flash games, and so far every game has come with a unique set of requirements. Making that all work consistently across devices has been a challenge.

That said, we try to solve issues encountered in specific games in generic ways, so that the more developers we work with, the stronger the web game stack becomes for all of us.

What are your goals for Poki for the rest of 2020? Do you have any other major partnerships in the works that you're able to talk about?

Michiel van Amerongen: In 2020 we hope to save more great Flash creations for future generations, while Erik, our head of game developer relations Joep van Duinen, and the rest of the team are working closely together with the developers behind those titles to build upon their old as well as new IPs. Together, we feel we can make the web a better place for games and game developers.

Interested developers can reach out to Poki via developers.poki.com or directly at flash@poki.com.