"We expect we will always hold a focus on mobile" 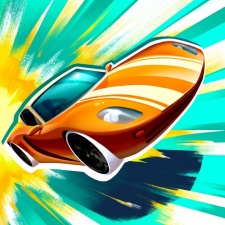 PocketGamer.Biz: Where did the initial idea for the game come from?

Andy Satterthwaite: The idea of being an 'Agent' in an amazing transforming vehicle, using cool gadgets, and saving the day in the nick of time again and again was something we've wanted to make for a long time.

Apple Arcade was the perfect chance to unleash our spy fantasies. We wanted everyone to have the chance of being a super-spy.

Olivier Chrun: We started development of Agent Intercept in February 2019 and released the first version with the launch of Apple Arcade in September 2019, but haven't taken our foot off the gas!

Since launch, we've more than tripled the content, with plans for even more to come. The team is made up of around 30 developers, including several industry veterans.

The team is made up of around 30 developers, including several industry veterans.

Andy Satterthwaite: As is often the case and scope was a challenge. There were big ideas for the number of missions and gadgets and vehicle transformations, many of which we have since implemented.

But allowing ourselves to deliver a contained yet meaningful product was freeing. It helped the team really focus in on the core action/driving gameplay, and make it feel as smooth and good and satisfying as we wanted.

Dwayne Kirkwood: After spending the initial months exploring ideas and building out the core gameplay, we set ourselves a lofty goal: a single-stage 'vertical slice' build. A vertical slice is a polished demo experience, which requires all of the content to be in a near-finished state.

This pushed the team hard. However, it also helped us realise just what Agent Intercept could and should be. The end result was the Crisis stage 'The Penny Drops' which included what would become Agent Intercept staples: exciting transformations, enemy confrontations, and a multi-stage boss battle. Seeing all of those fun and crazy elements fit together smoothly let us know we were really onto something.

Andy Satterthwaite: Our studio has been making mobile games for many years and console games for more than two decades, so Apple Arcade presented an exciting opportunity to work in a space that combined great aspects of both platforms.

It was especially thrilling to be one of the games available on Apple Arcade at launch and to be a part of a new venture that has the potential to fundamentally affect the way players engage with mobile games. The subscription model of the platform enabled us to stretch our design ideas and attempt a game that couldn't have existed in the same way in a mobile free-to-play market.

As more and more casual players make mobile the biggest games platform, we expect we will always hold a focus on mobile, though we're always looking to both hone our mobile expertise and see in what bold new directions we can go.

Olivier Chrun: We knew we wanted to be a part of the Apple Arcade launch and because it was a major launch of an entirely new platform, soft launching in the traditional sense wasn't really an option.

As more and more casual players make mobile the biggest games platform, we expect we will always hold a focus on mobile,

We knew from our other mobile games how valuable it is to continue to develop a game after launch based on the feedback we're getting, so our version of the game at launch was smaller in scope and more contained, which then allowed us to build out future missions and new modes with the benefit of some user feedback and data.

Our main feedback was that people wanted more, which is always a good problem to have!

Rick Stemm: Very! The experience of being able to make the best, most exciting game we could within the deadline was exhilarating. The challenges and restrictions forced us to hone in on the core of the product and that's been a very engaging experience for players so far.

So, we've been able to build off that strong core, adding more missions and challenges, more ways to score points and show off, more access to a deeper story. With every release, we find our groove a bit more, so the missions and modes and UI keep getting better and better, and that's a great feeling.

It was hugely rewarding to be chosen as a launch title for Apple Arcade - both for PikPok specifically, and New Zealand in general. We were able to help pioneer the new service and help put New Zealand on the map (which often gets forgotten about).

Rick Stemm: As an Apple Arcade title, there aren't really live ops for this one, so to speak (though that is one of PikPok's specialities). We did, however, want to get that competition in through the leaderboards as soon as we could.

We've had an amazing pace of updates, releasing essentially every month and they ran the spectrum. We almost always release a new mission and often those introduce a new feature - a new gadget or boss or environment.

We want to keep honing those quality-of-life features for players to make the experience as smooth as possible. Furthermore, sometimes the updates are incredibly exciting, like the release of the new Challenge Modes or our recent Story Mode. We're always trying to top what we did before is one of the most motivating parts of this title.

Karah Sutton: We're always working for a balance of keeping old titles fun, expanding our existing library and larger titles, and releasing new titles to build more IP. We can't give any specific details but our audience can expect devoted attention to our existing games, as well as a couple of new titles in the near future.