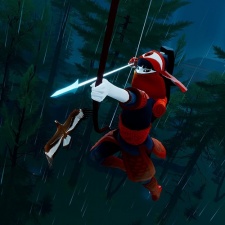 During Apple's Special event in March 2019, the world was given its first look at a new subscription service that would offer a collection of exclusive, premium games available to download at any time through the App Store. This was Apple Arcade.

More than 18 months on from that very announcement - and more than one year on from launch - Apple Arcade today features over 140 titles while continuing to grow with new experiences designed for the mobile platform on a semi-regular basis. One particular title, however, that was given a strong spotlight throughout the platform holder's promotional phase for the service, was The Pathless.

Developed by Giant Squid and published by Annapurna Interactive, the action-adventure follows The Hunter who utilises a bow and arrow to try and bring back light to an island infested by an evil curse. It immediately grabbed people's attention due to its art style, fast gameplay and comparisons to The Legend of Zelda: Breath of the Wild.

Now finally launched, we took the opportunity to speak with Giant Squid founder and creative director Matt Nava about the four-year journey, including the studio's surprise at being featured as the arguable headliner for Apple Arcade.

PocketGamer.biz: Where did the initial idea for The Pathless come from?

Matt Nava: The concept arose from a desire to create a game that extended the ideas we had explored in Abzû, bringing our unique atmospheric gameplay to an open-world format. I grew up visiting the Pacific Northwest and hiking in the misty woods there.

I envisioned a shadowy forest setting for the game from the start. The narrative concept of The Pathless was also known early, and originated from a quote from the philosopher Jiddu Krishnamurti: "The truth is a pathless land."

It was critical that no matter a player's experience level, they instantly feel as masterful with archery as our main character, the Hunter.

The game appears to take inspiration for The Legend of Zelda: Breath of the Wild, is that fair to say?

The Pathless had been in development for years before Breath of the Wild came out, so our design was already set, however we are big fans and are honoured by the comparison. When you get into The Pathless you will find it actually has a very different design when it comes to its open world.

It differentiates itself from basically all other open-world games by excluding a map - instead, asking players to understand the environment and navigate using landmarks and sonar-like ability called Spirit Vision. Getting up higher allows you to see more places to go, and so exploration and navigation happen at the same time, without ever leaving the space.

The game also centres on a unique archery mechanic that is driven by timing, rather than aiming. That aspect lets you move fast while shooting, which gives the game a unique sense of exhilarating moment to moment rhythm that is uncommon in open-world games. It was critical that no matter a player's experience level, they instantly feel as masterful with archery as our main character, the Hunter.

We worked for almost four years on The Pathless, with a team that grew up to 33 people at its peak.

One of the biggest challenges was simply managing the scale of the game and how that rippled through all parts of our production pipeline. It has a huge world, detailed cutscenes and intricate, epic boss encounters.

Simply making sure that all of those elements were getting the team resources needed was a challenge that forced us to improve our workflow and communication. We also had to transition to total remote development to bring the game to the finish line during the quarantine lockdown.

When did Annapurna Interactive get involved? Were there other publishers vying for the rights?

Annapurna was involved right from the start. We pitched the game to several publishers, but Annapurna understood it early and helped us make the transition from Abzû to The Pathless.

Can you tell us how the partnership came about between Giant Squid and Apple Arcade?

When Apple was first looking for games to put on their new platform, they toured Annapurna's line-up of titles and saw an early version of The Pathless. They fell in love with it. They told us that it perfectly encapsulated what they were trying to create with the service- a game that was both innovative, sleek, and accessible for kids and adults. We were very lucky they saw that in us and decided to feature the game.

What was the discussion surrounding The Pathless as the headliner during the reveal for Apple Arcade?

We didn't know how they would feature The Pathless and were surprised to see it so prominently in the reveal presentation...

Apple is very secretive when it comes to their events, so there actually was very little discussion. They asked us for a large variety of assets but kept us mostly in the dark about how they would be used. We didn't know how they would feature The Pathless and were surprised to see it so prominently in the reveal presentation and on the Apple Arcade key art. We are really happy with how it all turned out.

What was the process of creating the soundtrack? What feelings or emotions were you looking to evoke?

We worked with our good friend Austin Wintory, the composer who worked with us previously on Abzû. We wanted the feeling of playing The Pathless to be like living a myth and the music was written to evoke that. Austin created a score that features more than 100 musicians, playing all manner of folk instruments from around the world.

The score also features Tuvan throat singing by the incredibly talented Alash ensemble. The effect is a musical feeling that is both foreign but innately human and therefore familiar at the same time. The music reflects the Hunter's journey and dynamically changes from contemplative exploration cues to dramatic orchestral tracks during high tension boss encounters.

Talk to us about some of the difficulties (if any) faced with working on a game for both mobile and the PlayStation 5, a next-gen console?

It was a huge technical challenge to make an open-world game with no load screens run on devices ranging in power from a PlayStation 5 to iPhones from several years ago. We ended up extending the project's timeline and staffing up to handle the job.

Luckily we found some very talented programmers and designers who were able to shrink the game size on disk, optimise the graphics and create unique touch controls, without compromising the experience. It all worked out - that extra time didn't just help us get in running on all those devices, it made it a better game.

Early reviews for The Pathless are looking very positive, what is the team’s response to this?

We couldn't be happier. It's extremely validating to see people playing the game and not only enjoying it but being moved by it. We have received emails about how this game and its message have had a deep and positive effect on people's lives.

Even in the short time that it's been out, it has become something special to many people. We believed in this project and put our hearts into it for years - now the community is reflecting that love back to us, and it is truly nourishing.

What does the rest of 2020 and beyond look like for the studio?

It's been a crazy and stressful year for all of us, and shipping a game during this time has been a huge undertaking. We are working on some patches to polish up the game and then the team will be taking a nice month off!