Also coming to PS4 and Switch 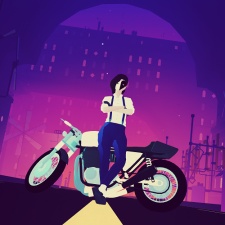 The arcade music game is all about dance battles, shooting lasers and wielding swords as the protagonist must repair her broken heart and restore the balance of the universe.

The game utilises vibrant neon colours and can see players riding anything from skateboards to souped-up motorbikes.

Simogo's previous release was the iOS puzzle title SPL-T in 2015. Before this, the firm worked on highly regarded games such as The Sailor’s Dream, Device 6 and Year Walk.

After being revealed originally at The Game Awards in December 2018, Sayonara Wild Hearts has been confirmed to release on Apple Arcade, Nintendo Switch and PlayStation 4 on 19th September 2019.

The game has already begun receiving favourable reviews on Switch, standing at an 85 on Metacritic on at the time of writing.

Apple Arcade is due to launch on September 19th with at least 54 games available on day one. You can read about them all here.