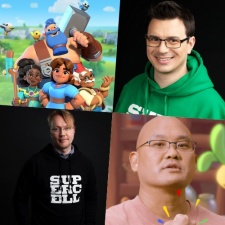 Ken Taya is the art producer at Supercell on Everdale.

Stefan Engblom is a game designer on Everdale at Finnish studio Supercell.

Supercell games are always a big deal in the mobile games industry.It's an occasion that doesn't come around very often, with Brawl Stars in 2017 being the last time the Finnish developer released a completely new IP into the wild.

Like numerous games in Supercell's catalogue, the game went on to surpass $1 billion in revenue. Looking to replicate that success, the company announced three new Clash of Clans titles earlier this year, an unusual move for the studio. Everdale, on the other hand, looks to follow Supercell's more traditional structure of testing, beta and then launch, if certain metrics are met.

That said, the actual game looks to step outside of Supercell's comfort zone with no looting or combat in sight. Instead, Everdale takes place in a peaceful village where players must work with one another to build structures in real-time.

The social aspect is right at the focal point too. Its community will be where it lives or dies with gameplay designed around 10 players performing co-operatively to complete tasks. That number is crucial to the overall experience.

"We were testing different numbers and at one point you could unlock more player slots but we just found that 10 gives a good mix of people, with people taking different roles," explains Supercell game lead Lasse Seppanen.

"Typically you would have three or four more active players that want to run the valley and make a lot of decisions and coordinate others. Then you would have about half a dozen people that want to just come in do some tasks and keep it simple." These were described as the "don't make me think" group that just want to switch off and play.

Opting for more relaxed gameplay naturally brings about comparisons to the juggernaut that is Animal Crossing, arguably the most popular of the genre (in terms of sales, anyway). A series that arrived on mobile yet failed to reproduce the goods it did on its home console/handheld.

"I would say we've all played it," Supercell art producer Ken Taya says, speaking on the impact of Animal Crossing: New Horizons.

We wanted the art to reflect the feeling that we get when we play it, which is peaceful and productive

"We always reference other games. For the world, we wanted the art to reflect the feeling that we get when we play it, which is peaceful and productive… We also referred to things like the Studio Ghibli animation series and a bunch of stories that are very low-stakes drama…"

"We think of the game as sort of an in-between of Hay Day and Clash of Clans..." Seppanen adds.

"We do have a bunch of other inspirations as well - The Sims, for example. There's a little bit of that flavour with the villagers as you develop them and they are quite unique."

Speaking on the natural flow of the game and how it also takes that same inspiration, Supercell game designer Stefan Engblom says: "The village gameplay has this flow system in a way where you assign villagers to do tasks, such as carrying wood to the construction site."

These workers will then need feeding so a cook will be introduced to dish up some goods for the workers to progress further. It's something that the player/s will need to keep their focus on throughout.

User moderation is another element that will need focusing on if the team wants to keep this peaceful environment… well peaceful. It's something every game sadly needs to address as there's always someone out there looking to sour the experience of others. Supercell is well aware of this and is planning to deal with the issues as they present themselves, according to Engblom.

"We react when we need to react," he says.

In terms of gender balance, it is tricky in this industry

Chat filters and report buttons will be implemented to help combat this issue but Everdale will more rely on its community to collaborate, communicate and provide feedback - a vital part of its soft launch process. Everdale has now launched an open beta on iOS and Android across 14 countries, including the UK, Australia, Canada and more.

A team of around 20 people have been developing the game, taken from Supercell's estimated 300-plus workforce. Only two of those employees were noted as being female, something it has historically struggled to combat. Considering large demographics of this genre are often made up of female players, this could end up as a costly decision.

"In terms of gender balance, it is tricky in this industry," says Seppanen.

"It was by no means a conscious choice but we don't have a lot of women in this team. We would love to have more… We ask around the company who would be interested in working on this game... [and] for one reason or another, we only have a couple of women working on it on the development side of things."

No release date has been slated for Everdale. There's "no strategy or roadmap" in place either. Its long-term viability is what will help it exit soft launch and become part of Supercell's extensive catalogue. The company isn't afraid to make the "hard decision" to cancel if it doesn't hit its standards. This could result in a short soft launch for a couple of months or a longer one that stretches into 2022, depending on KPIs.

"On a hard business level, you could think it's all about metrics like retention or monetisation, but ultimately behind the metrics, what the team is driving towards is to see a genuine love for the game," Seppanen says.

"We believe that will generate the metrics we want to see," he adds. "It's not purely about numbers."

Supercell is hedging its bets more than ever, as with more competition in the market, there's no such thing as an easy win anymore. Whether or not you are the biggest mobile games developer in the world.