Three new Clash games from the maker of Clash of Clans 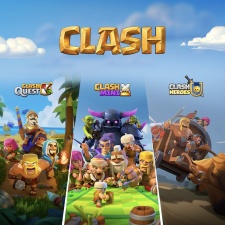 New Supercell game announcements are about as rare as unicorn sightings.

While it's common knowledge that the games industry's most successful company (TM) often has multiple projects in development, precious few survive to the stage of soft launch and even fewer attain the lofty heights of a public confirmation.

So when the Finnish developers of Clash of Clans, Hay Day, Boom Beach, Clash Royale and Brawl Stars (all grossing a minimum of billion-dollars - see our unicorn list) announce a trio of titles in one day that all promise to extend their most popular franchise, you know something special is in prospect.

Today is that day

In a public post on their website and social channels, Supercell has announced three completely new additions to the 'Clash' universe in the form Clash Mini, Clash Quest and Clash Heroes. Each promise distinctly different gameplay from any previous title as highlighted in the video reveal.

At first glance it appears Clash Quest has a match-three 'Puzzles and Dragons' or 'Legend of Solgard' style feel to it, Clash Mini seems inspired by the 'auto chess' genre, while Clash Heroes is a full-on action-RPG set in the Clash world. The diversity doesn't end with the game styles either, as this is a decidedly international affair on the creative side too, with Clash Quest being developed out of Helsinki and the latter two games being created from the Shanghai studios.

By their own admission, this is a "global first" from Supercell in terms of publicly sharing insight into games that are still early in development. Does this represent a new more prolific and more public strategy following a comparatively fallow period (by their own incredible standards at least)? Will these games be able to emulate the success of their illustrious forbears? Is this the beginning of the CEU (Clash Extended Universe)? When will these games be released? Will they even actually get released?

All these questions remain open and you can be certain we'll be keeping a close watch to provide answers and insight. For now, we can confirm this fresh 'open' approach, these three new titles, plus a final mention of several other non-Clash projects in development are all sure to make waves in the mobile games world.

The full post from Supercell can be read below:

We’ve got some exciting news to share with you!

The world of Clash means a lot to us at Supercell. It’s more than raiding enemies and destroying towers, more than Villages and Arenas, and more than the games we love to play. It’s a unique world filled with some of our favourite characters, and a place to experience fun and quirky epic moments… and obviously a ton of insane battles.

Simply put, our goal is to create games that players love and remember forever, so today's announcement is a bit special in that sense – mainly because we’ve never done anything like this before.

We’re excited to announce three new Clash games in development!
We usually don’t spotlight games that are deep in the development process, however, considering these are all Clash games, we hope our community finds this as exciting as we do!

These new games are nothing like prior Clash games. We want to focus on creating new ways of playing with your favourite Clash characters while deepening the world through new gameplay experiences.

For starters, we want Clash’s community to be a part of this journey. Clash wouldn’t be where it is today without the support from players and content creators around the world. With these potential new games coming, we want you to experience them as they evolve – either directly through playing them (for those that can), and/or through the communities that’ll grow early on.

We want the community to know the different types of Clash games being worked on – these new games are nothing like prior Clash games. We want to focus on creating new ways of enjoying and playing with your favourite Clash characters while deepening the world through new environments and gameplay experiences. That last part is key - we want to offer new ways of playing Clash and hope these games add on to your current gaming experience.

Of course, there’s a chance you might not like these games - and that’s okay, it’s all good. We totally understand these are very different from Clash of Clans and Clash Royale. On top of offering a new Clash experience to current players, we want to broaden Clash to new audiences who haven’t experienced Clash before.

Keep in mind we’re still holding every individual Clash game against the same high standards as any of our other games. With your feedback, we think these three can become the great games that Clash fans deserve. If they don’t meet the standards though, we’ll kill them and move on to other attempts – related to Clash or not. For those wondering, yes, we do have other games that are being developed that are not Clash related.

It’s important to note that the Clash of Clans and Clash Royale game teams are 100 per cent separate from the three Clash games (and the dev teams behind them). Meaning these new Clash games won’t impact any development or support for existing Supercell games.

If you are interested in playing these three Clash games visit www.clash.com and sign up to get notified when they’ll be available in your country. Beta games are usually limited to specific countries and then roll out if the game reaches certain (high) standards. It may take some time before the game is available in your region, and there’s always the chance that it gets killed during the beta process. Regardless, we appreciate your patience and especially your feedback as we develop and test these new games.

You can also stay up to date by following each game on Twitter:
Clash Quest
Clash Mini
Clash Heroes

We wouldn’t be able to do this without the passionate communities you’ve built around Clash of Clans and Clash Royale, nor without the continuous support and dedication from all Clash players and content creators. Thank you all for being a part of this journey, we hope you’re excited for what’s yet to come!