"We love bringing fun, inclusive and thrilling live tournaments to the nation and it’s great to see players enjoying and winning too!" 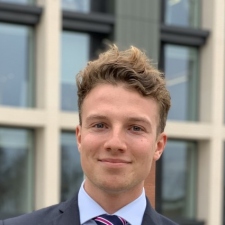 The 2022 FIFA World Cup is in full flow right now and alongside the traditional TV output, football fans have a new way to enjoy the game via ITV's KnockOut Live World Cup mobile game. New technology is altering not only how we consume traditional media, but also presenting new opportunities to interact with it.

Live Tech Games are at the forefront of creating games that directly interact with television events, with KnockOut Live potentially being the company’s biggest effort yet, allowing players to face off in live trivia challenges based on the days events.

We spoke to Live Tech Games co-founder and co-CEO Samuel Worsley about the company’s business model and plans for the future.

Pocketgamer.biz: Tell us more about yourself and Live Tech Games

Samuel Worsley: My name is Samuel Worsley and I am the co-CEO and co-founder of Live Tech Games, a pioneering industry solution to customer engagement. Live Tech Games is a platform that creates captivating, appointment-to-play experiences direct to consumers’ phones, re-engaging customers through a directly related second screen experience.

I started my career at Microsoft which gave me the foundations of business experience and is now the tech platform that supports hundreds of thousands of Live Tech Games’ players. With the mobile games industry growing rapidly year on year, myself and my co-founder Nathan Moore identified a gap for live, competitive, inclusive games with low commitment and high reward. The Live Tech Games offering is a win-win, providing brands and broadcasters with a seamless brand engagement and retention solution as well as a thrilling experience for players.

Can you please explain the core concept of KnockOut Live, and what makes it different from other games?

KnockOut is a live tournament-style game where players are put head-to-head in varying and unique trivia formats that challenge their football knowledge and attention to the matches of the day. KnockOut, like every other Live Tech Games experience, is free to play with prizes up for grabs if you make it to the end. It’s also sponsored by Pukka Pies, and every tournament has trivia questions from the FIFA World Cup games streamed on ITV and played that very day, making it a true football matchday experience.

What sparked your decision to collaborate specifically with ITV?

Live Tech Games is pioneering in the sense of creating those very special exclusive moments in time, unlike most casual games that people play whenever they want. ITV is among the most famous platforms for live entertainment. When the team expressed interest in developing appointment-to-play, mass public engagement, through a digital concept, the opportunity for us was huge.

We connected with ITV originally through Studio 55 Ventures, which is an arm of ITV that seeks innovative and unique investment opportunities and budding entrepreneurs. Through Studio 55, we secured both investment and collaboration deals to support ITV in its digital development. We could see that ITV was already investing significantly in gaming and innovative entertainment methods which was a signal to us and to the market that the big players, like ITV and Disney, are keen to take cross-platform strides.

Is it right you have numerous other games in the pipeline with ITV? If so, will these be based on shows, and will they be following the same gameplay model?

Our future plans for ITV are really exciting. We have already released two games: WordSurge specifically for This Morning viewers sponsored by ITV Win; and KnockOut for FIFA World Cup viewers sponsored by Pukka Pies. Both games have been really successful, with thousands of players and topping App Store Charts. We have plans to continue developing games for both our national and international offerings into the next year. We’re already working on our next game mechanics and development and while I can’t give too much away just yet, it’s going to be huge.

Our gameplay model of appointment-to-play, live, tournament based mobile games is across the board of the arms of our business: both with ITV games and with our international brand  pogl, in the US, where we are creating a go-to destination for live gaming. In a world where everything is available at the touch of a button, we wanted to create something unique for the nation to look forward to.

What, if any, logistical problems have you faced getting this game off the ground, and how have you overcome them?

We’ve definitely faced some challenges with our live games. Our biggest concerns are how our technology handles hundreds of thousands of concurrent players. In a traditional game such as Call of Duty, you have millions of people playing at one time however, in an individual game there’s never more than 100 people. With Live Tech Games, the platform is designed to support the whole nation playing against each other; mass concurrency for gathering, processing and delivering the results at such scale creates technical challenges.
We’ve overcome this through a combination of things: our framework has to be simplified as any additional step could cause a systemic collapse. The best way to move forward, we have found, is to consistently look at this both from a perspective of how gaming systems are architected, but equally looking at enterprise business solutions. We moved our technology over to Microsoft Azure and it has proven the most successful in handling the mass concurrent players.

Has the reaction from players met your expectations?

We’ve been so pleased to see how many people are playing and enjoying our games so far. Launching in partnership with ITV has allowed us to reach so many more players. Our ethos has always been to be inclusive of as many people as possible, with simple rules for children to grandparents and games that cater to a range of interests: from football fanatics to crossword lovers. Both WordSurge and KnockOut have been at the top of App Store charts and seen millions of gameplay minutes. We love bringing fun, inclusive and thrilling live tournaments to the nation and it’s great to see players enjoying and winning too!

Will you be continuing with KnockOut Live for future tournaments and matches and, if so, what will you be doing differently?

KnockOut Live is currently exclusive for the FIFA World Cup 2022 however, the methodology and framework is already being integrated into other games and will be re-used and recreated for future games with ITV and beyond. At this stage, we can’t say too much more about our future games and plans but with every game we launch we take every learning onboard. We take user reviews, feedback and data seriously as our ultimate goal is to to build a platform that brings the best experience to our players and partners.