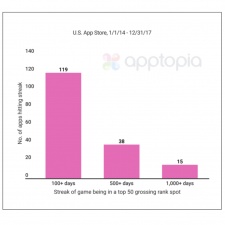 A recent Apptopia study of top 50 games on the US App Store shines a troubling light on the state of iOS development.

With data gathered from 2014 through 2017, the study reveals that an average entry in the top 50 grossing games only retains its position for 27.7 days.

These numbers are skewed by firmly-emplaced top-hitters, however - over the multiple years of study, only 14 games took the number one spot.

Two-thirds of games studied lasted five or less days in the top 50. Entries lasting a day or less accounted for a third of all titles in the list.

There were over 800,000 games listed on the store at the time the figures were reported. The top 50 of them took 76 per cent of all the revenue, leaving the remaining 99.99 per cent to fight over the remaining 24 per cent of revenues.

Top five games can expect roughly $750,000 per day in in-app purchases, $340,000 for top 10. Staying in high places can be highly lucrative for those lucky enough to land there.

It should be noted of course that depending on the size of the studio and aims for a project, being outside the top 50 can still prove a very lucrative venture.