Company partners with Tilting Point and Metagame Studio on project 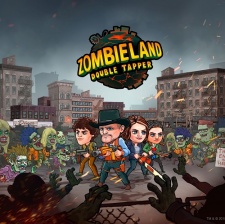 Sony Pictures Television Games has partnered with Tilting Point and developer Metagame Studios to launch a new mobile RPG based on the Zombieland franchise.

Zombieland: Double Tapper will feature a large roster of heroes to collect, upgrade and customise, including the four main protagonists: Tallahassee, Columbus, Wichita and Little Rock.

A large arsenal of weapons will be at players' disposal to take down hordes of zombies and effectively survive the onslaught.

No release date was given for the title, though the Zombieland movie sequel will hit theatres on October 18th. Those interested can pre-register for the game here.

“The game will provide hours of entertainment for fans of the Zombieland franchise, as well as anyone who enjoys killing hordes of undead.”

Tilting Point president Samir El-Agili added: “We’re thrilled at the opportunity to display our skills and dedication in co-developing a title with such a beloved franchise.

“At Tilting Point we’re confident in our UA funding and expertise, best-in-class AI tech, and deep understanding of free-to-play mobile games to ensure success for Zombieland: Double Tapper and to provide a game players everywhere will love.”