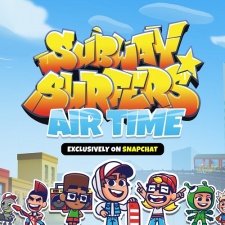 The new title is the first “franchise extension” of the popular Subway Surfers mobile game.

Designed exclusively for the Snap Games platform, Subway Surfers Airtime is a side-scrolling multiplayer racing game that lets up to 10 players surf, slide, grind and glide across a slick 2D cityscape, all in a bid to reach the checkered finish line first.

Snapchatters can play with friends in real-time. In the Snapchat app users just open a Chat or Group Chat with friends, and tap the rocket icon in the Chat Bar to launch Snap Games.

“It’s a win-win to work with a like-minded company that is committed to fun and offer our fans on Snapchat an opportunity to extend the SubSurf lifestyle.”

Head of Snap Games Will Wu added: “Snap Games is mobile games made for friends, so it’s exciting that SYBO has developed its first franchise extension of Subway Surfers for our platform.”

“We can’t wait to see how our community embraces this new way to connect and play with their friends through the familiar world of Subway Surfers.”

As part of our Live and Kicking series, we caught up with Nørvig following the seven-year anniversary of the endless runner.