550,000 installs to date, according to Sensor Tower 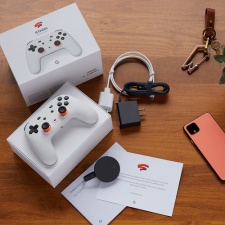 Google's game streaming platform Stadia has seen its mobile downloads reduce by half since November.

According to Sensor Tower data, from November 5th, 2019 to January 13th 2020, the mobile app version of Stadia has accumulated 550,000 installs. It's worth noting that while Stadia launched on November 19th, the Google Play app was made available on November 5th and the App Store version became accessible on November 12th.

The Stadia mobile app achieved 383,000 downloads in November alone, meaning the number of app installs has only increased by 43.6 per cent since.

When it comes to how many installs were generated across each store, Google Play heavily dominated at 409,000 or 74 per cent of the total. The App Store then made up the remaining 141,000 or 26 per cent.

The US claimed the highest portion of downloads at 249,000 or 45 per cent. Following this was Germany at 54,000 and France at 53,000, both representing 10 per cent of the overall. Great Britain and Canada rounded out the top five at 43,000 each, which was equal to eight per cent apiece.

During its first fortnight, the app was estimated to have been downloaded approximately 175,000 times. These numbers do not necessarily correlate to the number of paying users on the platform.

It's also worth noting that only the Android app supports game streaming directly to the phone, and only on certain models in the Google Pixel family of smartphones. The iOS app is purely for managing Stadia accounts.

Google Stadia acquired indie developer Typhoon Studios for an undisclosed sum and will be utilised to work on first-party development for the streaming platform.