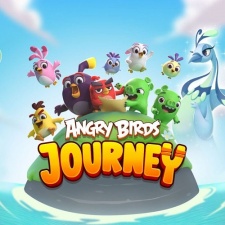 Rovio has soft-launched Angry Birds Journey, a new casual puzzle game that will see the classic slingshot gameplay return to the series.

The Finnish developer revealed the development phase in a blog post, confirming that the game will available to download in the US, Finland, Sweden, Denmark, Canada and Poland across the App Store and Google Play.

Angry Birds Journey is free-to-play and will see the birds travel to new locales throughout the story, with several fan favourite characters set to return, alongside various new faces and a new art style. The game is aimed at beginners to the series as well as long-time veterans.

Rovio will monitor and react to player feedback of Angry Birds Journey to make improvements and "chart a flight path" for the title going forward.

Rovio has subsequently confirmed to PG.biz that Angry Birds Journey is a rebrand of Angry Birds Casual, which originally went through an early market testing period from March to May last year.

During that time, Angry Birds Casual was available on iOS devices in Finland, Poland, Sweden and the US. Gameplay showed that instead of attacking their normal nemesis - the Bad Piggies - the birds partnered with their adversaries to free caged Hatchlings. By completing levels, coins could be spent to unlock in-game rewards.

An update added in player profiles, avatars, mystery boxes, on top of new effects and visuals. It's not clear how many of Angry Birds Casual's elements will carry over to Angry Birds Journey.

If the game does make it out of soft launch successfully, it will be the 19th official Angry Birds game to launch since the first made its debut in December 2009.

No details of an official release date were shared by the studio at this time.

Just before the Christmas break, Rovio confirmed that it had ceased development of its previously soft-launched turn-based RPG Angry Birds Legends.

It seems Rovio's bar for a full release is set quite high, as only a couple of months prior to this did the studio scrap Angry Birds Tennis following another unsuccessful soft launch period.