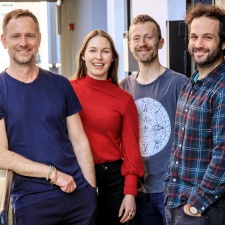 The team possesses considerable expertise in F2P and mobile casual gaming on one of the biggest mobile franchises. However, the remit of pnkfrg studios – aiming to “creat[e] a new casual mobile experience by transforming user generated video content into an interactive gaming experience supported by Bitcoin and the Lightning network” – remains loosely defined.

Lanik, CEO of pnkfrg studios, stated: “We founded pnkfrg studios because we believe in a paradigm shift in casual mobile gaming as well as in a new way of digital financial transactions. Players and creators seek to be rewarded for their time, want to own and trade digital assets, and expect to gain value for their skills and contribution while having a fun time.

“With our product we are addressing the needs of the generation of mobile natives and social creators. We want them to play our games on their daily commute or break, obtain crypto rewards for their engagement and give them the opportunity to spend, save, or donate it in real life – direct, frictionless, rewarding. The Bitcoin lightning network with its low fee microtransaction is a perfect solution to support our vision”