23 per cent decrease in closed deals over 2021, although significant spike throughout rest of 2022 anticipated should MS/Acti, Take-Two/Zynga, and Sony/Bungie deals complete 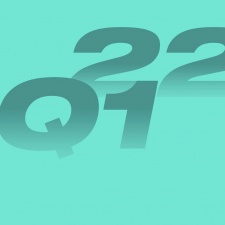 InvestGame’s Gaming Deals Activity Report Q1’22has revealed the tempo and potential fractures in the state of 2022 M&A in the games industry, including the influence of blockchain gaming among private investment, and mobile stepping up from the considerable decline in gaming investment activity.

It is worth mentioning that 2021 figures are primarily bolstered by Microsoft’s $7.5 billion acquisition of ZeniMax, while five deals provided 68 per cent of 2022 total deal value: Embracer acquiring Asmodee for $3.1 billion, SteelSeries’ acquisition by GN Store Nord for $1.2 billion, Tencent’s acquisition of Sumo Digital for $1.3 billion, MoPub by AppLovin for $1 billion, and ESL being acquired by Saudi Arabia’s Savvy Gaming Group for $1 billion.

Regardless, this is exceptionally unlikely to represent a downward trend in 2022 M&A, which will see dramatic upswings in Q2 onwards, should the Microsoft/Activision Blizzard ($68.7 billion), Take-Two/Zynga ($12.7 billion), and Sony/Bungie ($3.6 billion) deals complete, let alone the current drive for further consolidation.

Within this, blockchain-related gaming has attracted around 50 per cent of private investment deal value, drawing in $1.6 billion across 85 deals. Three of the top five deals are linked to blockchain: the $450 million seed round of Yuga Labs at $4 billion valuation, Animoca round of $359 million at $5 billion valuation, and the $200 million Immutable Series C round, valued at $2.75 billion.

However, gaming investment activity in pure gaming companies has declined from 96 deals valued at $2.7 billion in Q1 2021 to a significantly slimmer $1 billion across 52 deals.

InvestGame speculates this represents “faded interest of investors in pure gaming companies, what with the rising interest in blockchain-powered gaming, combined with the generally harsher market conditions of today”. Within this, the mobile industry represents the most active sector, with $600 million across 23 deals.

Very few voices within the mobile games industry predict a decline in the hunger for M&A. In the first of his new monthly column for PocketGamer.biz, Ampere Analysis’ Piers Harding-Rolls looks at the biggest drivers and outsider influence behind Q1 2022 M&A.

You can also check out our list of the 10 biggest M&A deals in the games industry through this link.