Studios can test as many games as they like, pass the benchmark and win again and again with different games 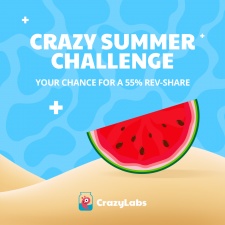 Hypercasual mobile game developers can get 55 per cent revenue share and win additional cash prizes in a new challenge by CrazyLabs.

The Crazy Summer Challenge invites developers to submit their hypercasual games and test their ideas inside the CLIK Dashboard - CrazyLabs' self-serve platform for transparent game testing and usage monitoring.

CrazyLabs will offer to all that meet the required KPIs (subject to the T&C) the following prizes:

The challenge is already available and mobile game developers are invited to apply.

The challenge is open to all game developers and invites studios to submit and test any hypercasual game. The challenge will end on October 20th, 2022 and developers are encouraged to apply now for the Crazy Summer Challenge and test as many games as possible.

In the past couple of months, as you can see in CrazyLabs’ monthly trend report, (available to CLIK members, CrazyHubs members and publishing partners) Idle games are showing significant growth. A great example would be the recent successful launch of CrazyLabs’ hit game; Dig Deep.

This subgenre of hypercasual mobile games allows players to move forward with minimum interaction, which creates a satisfying progression. The in-game currency, be it coins, gems or what-not, increases on a regular basis, enticing the players to interact by choice. While idle hypercasual games sometimes face higher CPIs, idle games get better usage numbers, with playing time that crosses 60 min.