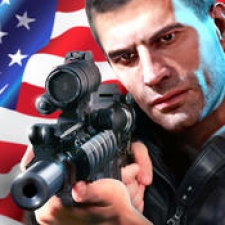 Zombies, as is their wont, just keep coming back for Czech developer Madfinger Games. 2012's Dead Trigger quickly became one of its most popular games, spawning a 2013 sequel, although neither game was a natural in terms of user experience as a free-to-play experience.

And now we have Unkilled, a game that's technically decoupled from the Dead Trigger series but shares the same predilection for killing zombies with bullets and a solid meta-game of missions, raids and achievements.

Madfinger's been doing this for a while, then, and from a purely mechanical standpoint this shines through.

For a touchscreen-controlled FPS, Unkilled manages to hit upon a control scheme that's less clunky than most. It's a simple virtual twin sticks for movement and camera movement combined with auto-fire when you're targetting an enemy.  There are also fixed heavy weapon levels too.

Incentivised ads are an imperfect yet serviceable solution to restoring energy.

Its backstory makes a lot more sense than Dead Trigger's, too. While that game cast you as the world's most tooled-up survivor of a zombie apocalypse, Unkilled at least explains your incredible firepower by positioning you as a soldier for a private military unit.

It also features some of the most atrocious dialogue ever seen in games, but that's by the by when you're gunning down zombies.

There have been a few F2P shooters on mobile, but they're not so obviously cut out for the model as strategy games and the like. So how does this Unkilled's monetisation stand up to player scrutiny?

Starting out, there were worrying parallels with Frontline Commando WW2, a game whose hyper-aggressive monetisation resulted in it being rejected in a previous entry of the IAP Inspector.

Unkilled has a lot in common with that game: an energy system, incentivised video ads, scarce hard currency, and a system by which you are locked out of levels until you sufficiently upgrade your weapons.

It's true that it barely engages with reciprocity for its hard currency (gold), allowing you to begin the game with zero and granting only meagre rations of it for completing certain tasks and missions. For example, completing the first 10 missions will gain you 16 gold; worth $0.16.

And it's also true that the game's energy system can be restrictive, with each of the game's very short missions costing at least 1 of your 6 energy bars and taking 10 minutes to refill.

But for everything Frontline Commando did wrong, Unkilled has a response. For instance, you can restore one energy bar by watching a short video ad. It still costs 10 gold to restore in full, which isn't cheap, but it's good to at least have an alternative.

As for buying upgrades and new weapons, there's a system in which weapons are unlocked as you progress through the game. If you haven't reached the required tier for a weapon you can buy it using gold only, but almost everything can be purchased with soft currency (cash) in due time.

Unkilled manages to hit upon a FPS control scheme that's less clunky than most.

It's a nice system - allow paying players access to some of the better weapons early, if they desire, but don't lock off the non-payers altogether.

The gold yield for for money is pretty impressive, too. Indeed, given that I struggled to muster 25 through standard play, even 500 gold ($4.99) is an impressive haul.

I guess whether that's a testament to the generosity of the IAPs or the tight-fisted nature of the game in general is a matter of perspective.

Seeing how good value these IAPs were, even though I was doing just fine freeloading, I opted to invest at the lowest tier, just to get a taste of the benefits it could bring.

These benefits, as it turns out, are relatively insubstantial. Of course you can pay for weapons ahead of time, refill your energy should it deplete, and skip wait timers on new weapons and upgrades, but none of these things are too much of an issue anyway.

Incentivised video ads are an imperfect yet serviceable solution to restoring energy, wait timers are relatively short, and the game's easy enough for you to be content with the natural pace of unlocking weapons.

Paying for chests is another thing you can do with hard currency, which throws up some random items - maybe even a chest-exclusive weapon. You get one free chest per day and can gain access to more by watching an incentivised video ad.

The best things in life are free

The reality for the FPS genre, unlike in strategy games in which you know buying IAPs will significantly accelerate your progress, is that the only players likely to invest are those really keen to use a certain weapon or who want to more quickly level up their existing weapons to have a higher chance of three-starring each mission on the first attempt.

It's a situation altogether closer to the traditional model, laying down your cash for one particular item rather than buying 100 gems and spending them over time in batches of 2 and 3.

All-in-all, then, Unkilled provides a fun and fair experience for a non-paying player, to the extent that the game's hard currency feels almost underpowered.

And that's not a slight on the game - far from it, in fact - but those looking to spend should make sure there's something they really want to purchase before shelling out on high amounts of gold.