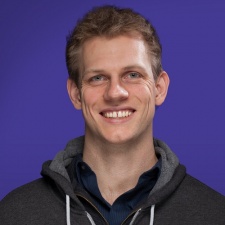 When Facebook Instant Games rolled out in November 2016, EverWing was one of the smoothest and most feature-complete launch titles available.

A vertically-scrolling shoot-'em-up, EverWing is a game that's easy to play in short bursts but also allows the player to carry progress and upgrades across multiple sessions.

Amidst a raft of fairly rudimentary experiences and arcade ports launching alongside Facebook's HTML5-powered gaming augmentation of its Messenger app, it immediately stood out.

One reason for this is that its developer, Blackstorm Labs, was set up specifically to create - and facilitate the creation of - great experiences that don't require their own app in order to function.

The basis of this is Blackstorm's own development environment, which gives it a headstart on making HTML5 games.

“We've tried to put as much as we can into the core tech so that we can build experiences like EverWing really quickly,” Blackstorm CEO Michael Carter tells PocketGamer.biz.

And with Facebook bringing mobile gaming into Messenger with Instant Games, it seems as though the two companies are in agreement on what the future of mobile gaming looks like.

“What actually shocked me the most about working with Facebook is that despite their scale, they're willing to take a pretty incredible amount of risk in terms of iterating on features and changing the paradigm,” Carter reflects.

Indeed, playing games within the context of a messaging app is fundamentally different from downloading an app.

We have to take what would be a large downloadable and turn it into something that loads in a maximum of 10 to 20 seconds.

This leads to a number of unique challenges and opportunities, which Blackstorm has sought to address in EverWing with a combination of technical knowhow and thoughtful design.

“We have to take what would typically be a very large downloadable on the app store and turn it into something that loads in a maximum of 10 to 20 seconds,” says Carter. “And then we need the UI and UX to be as frictionless as possible.”

He adds that Messenger boasts one billion monthly active users, which means Facebook Instant Games have to be equipped to handle a potentially huge player base.

“The very first thing that we have to recognise is that this is, from an onboarding standpoint, a very casual audience,” explains Carter. “They need to be able to understand the gameplay in the first 30 seconds.”

Ahead of the curve

Considering Facebook Instant Games in context was also a priority for Blackstorm when designing EverWing, positioning the game as an augmentation of the chat and not a replacement activity.

To this end, it recently launched a co-op Boss Raid mode in EverWing - making it the first title on Facebook Instant Games to support synchronous co-op play.

“Cooperative multiplayer is not something we were able to include at launch because there was no way to reflect the names and profile pictures of the people you were playing with,” recalls Carter.

“The game didn't have access to that information because the API didn't exist yet."

However, Blackstorm predicted - assumed, even - that it was only a matter of time. And eventually, its foresight paid off.

“We actually went ahead and started developing the co-op experience before it was possible, and sure enough Facebook actually added that feature,” he reveals. “That allowed us to launch this straight after, almost on the day.”

At not even four months old, Instant Games is a very new platform - and for most, a brand new concept.

As such, much of this early phase has been about testing the new behaviour of transitioning between chat and play.

The overall friction is way less than downloading a 100MB game over Wi-Fi.

“But the overall friction of that is way less than downloading a 100MB game in a few minutes over Wi-Fi… we have some pretty incredible engagement metrics that actually are better in many cases than what you typically see on an app.”

These are not Facebook's, but Blackstorm's own engagement metrics - the most striking of which is that the average retained user on EverWing spends one hour per day playing the game.

“An hour a day means that there's a considerable investment, where this becomes one of the few apps or experiences players access every day,” Carter enthuses.

“It might be they have Gmail, or Uber, or they're chatting - and EverWing becomes one of the core use cases, even though there's no home screen icon for EverWing.”

For both Facebook and Blackstorm, it's an early validation of this new direction.

And while there remain unanswered questions - principally monetisation - Blackstorm will continue to work one step ahead of what's currently possible until it finds answers.