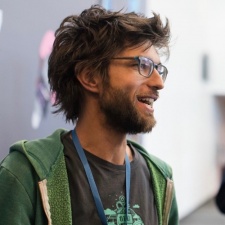 In 2014 Broken Rules found itself on the brink of closure.

Despite an opening show of potential in 2009 with a collage-style puzzler called And Yet it Moves, follow-up efforts Chasing Aurora (2012) and Secrets Secrets of Rætikon (2014) failed to garner the critical reception or sufficient buzz necessary to stay afloat.

Initially founded in 2009 by five graduates in Vienna, the group didn’t want to lose what CEO Felix Bohatsch describes as their collective baby. So rather than succumbing to closure, the group decided to keep the studio around as a downsized creative hub.

Under its new guise, each of the founding members could come and work independently or collaborate with others. Up-sizing with additional freelancers was then an option if they believed they had something.

“We’re not a traditional games studio in the sense that we have multiple projects working in parallel,” Bohatsch tells PocketGamer.Biz.

“We’re just not very good business people or entrepreneurs, we have the company but we just want to make games. It’s what we care about most.”

We’re just not very good business people or entrepreneurs, we have the company but we just want to make games.

The move proved handy in keeping an established name and connections within the games industry.

Following on, a gig porting And Yet it Moves to iOS with Japanese publisher DENA provided some handy respite for the team.

With money left over after work was completed the inevitable itch to tangle with creativity re-emerged.

As a means to progress wisely though, Bohatsch had to unpick a myriad of problems to understand what had gone wrong previously.

“One of the problems we had with Chasing Aurora and Secrets Secrets of Rætikon was that there were too many cooks in the kitchen,” explains Bohatsch.

“Too many people who wanted to fulfil their personal and creative passion in one game and that led to too many compromises, which was bad for the project.”

To offset the problem Bohatsch would seek to keep the project focused by working with Broken Rules’ art director Clemens Scott in the early stages, keeping work between the two of them.

The duo settled on crafting something personal. The understanding was that the chance of success was slim but if the worst case scenario were to occur, then the two would always have that sense of passion to fall back on.

It’s very important to us personally as our personal drive is to create games and Broken Rules in that sense is our baby that we really care about.

The resulting core theme of Old Man’s Journey that the two tapped into was family. More specifically, the struggle to balance family life with their passion for crafting games.

“In Broken Rules we have eight children collectively, so we’ve made four games and eight children. This is something that connects us as well as our company is like another child,” says Bohatsch.

“It’s very important to us personally as our personal drive is to create games and Broken Rules in that sense is our baby that we really care about. But then there is family life, our own children and trying to spend time with them. So that balance is something we’ve all struggled with a little bit.”

The pitch would be passed up on, however, by DENA. Reason being that As it Moves was an experiment for premium games and it decided it would be sticking with the free-to-play model.

While Bohatsch and Scott felt compelled to push the endeavour, confidence was not something they could commit too.

While the team believed Old Man’s Journey had a strong market position and a waiting audience, they remained burnt by their previous failures. To remedy the feeling and garner some additional funding the two would look to external greenlighting for the answer.

“We didn’t have any money anyway to produce the game but getting it from the outside was also a way of saying ‘okay we think this is good, but we don’t trust our own judgement anymore that our vision can turn into an interesting game',” says Bohatsch.

We wanted to have someone out there to say ‘we’ll give you money as a show of faith'.

“So we wanted to have someone out there to say ‘we’ll give you money as a show of faith'.”

The pair would find the funding and vote of confidence in-part fromthe Indie Fund, with the other part coming from a Vienna city grant.

Regarding visual composition, Bohatsch drew inspiration from an inconsequential photo he saw at a friend’s house that exuded a sense of wanderlust. The photo depicted rolling hills set against a morning fog in which the hills themselves disappeared.

The photo would also go on to inspire Old Man’s Journey’s gameplay mechanics. An adventure-led puzzler, players navigate and manipulate landscapes to guide an aged protagonist from point to point.

“We had some brainstorming discussions where we talked about layers of games, maybe a game where you play 2D but it feels 3D and you move into layers. Various ideas were moving around in my head and as it is with creative processes I think it is the subconscious that does a lot of the work. ”

The story of Old Man’s Journey would then come as a combination of all that came before it. The beauty and sense of direction that came from the photograph combined with the team's own journey up until that point.

We know it’s hard to balance it. We know it’s super stressful to raise kids and to have a family, it’s definitely the most challenging part of my life.

“We wanted to transport that feeling into the game. That there is this character and that he or she needs to go somewhere,” says Bohatsch.

“That's when the whole family topic came in and we thought ‘okay, maybe it’s about family, maybe this character needs to be somewhere because of family'. Then the strong sense was reconciliation.”

“From there the old man came in pretty quickly. Because he had lived his life already and he has some regrets and he’s made some mistakes. He has a strong wanderlust to be somewhere else and go on a journey of reconciliation to meet up with his family one last time before it's too late.”

Old Man’s Journey would eventually launch to the type of critical aplomb that Bohatsch believed to be improbable at the game's inception.

Among accolades is the Standout Indie Award from Google Play in 2018, an Apple Design Award in 2017 and an Excellence in Art award from Busan Indie Connect in 2017.

The game has also apparently proved popular in China where it has shifted the most units.

Bohatsch is particularly taken by its perception in Japan, where it is described as a healing game. Much like how he has enjoyed the title's success by being with his own family, Bohatsch hopes that workers in Japan are finding healing by embracing the game's message and balancing work with family.

“We know it’s hard to balance it," he states. "We know it’s super stressful to raise kids and to have a family, it’s definitely the most challenging part of my life.

“But there is just so much you lose if you don’t make up for it and that’s what the old man ultimately regrets.”

You can read more articles from our Indie Spotlight series here.