"History is a wellspring from which comes a multitude of inspiring stories about ordinary people who stand up to a vast, seemingly undefeatable evil threat and win" 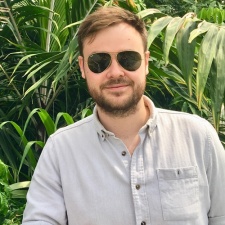 With an art style based on vintage travel posters and Wes Anderson, Stave Studios’ depiction of 1939 Switzerland strikes up a sense of nostalgia that wouldn’t be out of place in the director’s 2014 film The Grand Budapest Hotel.

Behind the beautiful visuals, however, there’s a more earnest sense of realism in Over the Alps. Alongside the romanticism of espionage, intrigue and adventure is a real stab at the fascism prominent at the time.

As far as debuts go it’s an endearing balance to attempt to strike. A half text adventure and half point and click, Over the Alps is a tale of evading capture in Europe on the brink of war, determining friend from foe and pushing back against the thrust of fascism.

We caught up with Stave’s studio lead Samuel Partridge to find out more about Over the Alps, political inspirations and the landscape between mobile and Nintendo Switch for indies.

PocketGamer.Biz: Can you tell us a bit about yourselves and what brought you all together?

We were working on an out of hours project called Over the Alps that really was just for fun.

To begin with the team was just myself, I was working at Failbetter Games (Fallen London, Sunless Sea) and Josh, who was working in advertising as an illustrator for McCann.

We were working on an out of hours project called Over the Alps that really was just for fun.

Over time we brought on Matt Arneil (ex-Alchemy VR) to help develop the game and Cash DeCuir (also ex-Failbetter) to help fine tune and rework our narrative design.

After a fantastic reception at the Leftfield Collection and a fair amount of attention, we spun the team into the company we have today.

Could you tell us a little bit about Over the Alps and how it’s all coming along?

The final few technical features are going into the game meanwhile and everything is planned out in draft. It's very exciting to see it come together.

What inspired Over the Alps vintage setting and visual aesthetic?

Firstly, we're all big history buffs on the team.

The rise of illiberal and anti-democratic regimes around the globe strongly echoes the late 30s. This worries us to say the least.

We’re in love with the aesthetic of vintage travel posters, which sadly isn't often reflected in games.

Secondly, it's vital for the story of the game; We want to lull the player into a world of nostalgic adventure, a mythical memory of WW2.

Something that we could, in the course of the game, use to better examine the ugly realities of that time.

Thirdly, Josh (our artist) just loves the style. He nails it every time and it's such a joy seeing new art pop into our Google Drive.

I’ve read on your website that Over the Alps is a story about the prejudices that marked 1939 and that you’re keenly aware that they’re still rampant today. Was your decision to explore past prejudices influenced by what’s going on in the modern day?

The rise of illiberal and anti-democratic regimes around the globe strongly echoes the late 30s.

This worries us to say the least, but the period can teach us a huge amount about how to combat this.

History is a wellspring from which comes a multitude of inspiring stories about ordinary people who stand up to a vast, seemingly undefeatable evil threat and win.

History is a wellspring from which comes a multitude of inspiring stories about ordinary people who stand up to a vast, seemingly undefeatable evil threat and win.

It also teaches us what happens when they don’t stand up. We hope to inspire just one individual to make a difference.

With major companies distancing themselves from the political themes within their games, is a willingness to do so becoming an inherently indie thing to do?

It sometimes seems to be, especially when looking at games like Orwell, Sunset and the upcoming Through the Darkest of Times, that really push the political envelope.

But there seems to have been movements in the right direction by major companies as of late; small steps, but steps all the same.

What was behind your decision to rein in Over the Alps image as a mobile title and pivot to PC and aim for the Nintendo Switch?

A tough one! It boils down to the user experience. Over the Alps simply feels and plays better on a larger screen with more input controls than a smaller screen with just touch, far more than we originally anticipated. This was really unexpected.

Rather than fighting it, we're accepting it.

The Switch would be a perfect fit; the combination of portability, number of controls and screen real estate match the 'feel' of the game.

We'd still love to do an iOS launch eventually but would have to take some time to optimise and rejig the game, which is tough for a smaller team to do quickly.

For now, Nintendo is playing bouncer and being selective with who gets in, which is great.We imagine the queue is lengthening, however.

What is it about the Switch that has made it an increasingly popular destination for indies? Especially compared to prior Nintendo handhelds and consoles?

Though we can't speak for other devices, the Switch is a solidly built mid-form console that's perfect for slightly smaller, premium games that’s straightforward to develop for. What more could an Indie ask for?

Do you think more indies will be making the jump from mobile to Nintendo Switch?

Yes, but only those whose games are well suited for the platform.

Over the Alps is a premium title, with multiple UI elements - a map, postcards to read, a logbook - and the right level of 'pick up and play' to deeper gameplay.

If it were free-to-play, more contained, then it really wouldn't fit and that jump simply wouldn't make sense.

For now, Nintendo is playing bouncer and being selective with who gets in, which is great.

We imagine the queue is lengthening, however.