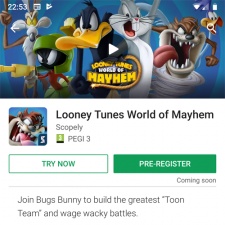 Over the years there have been plenty of attempts to improve mobile game discovery.

But from incentivised video ads to personal recommendation engines and social gaming networks, none has overcome the friction associated with actually getting people into app stores and tapping on the install button.

Even within app stores, the addition of larger screenshots and video trailers hasn’t totally solved the problem of games that are downloaded and immediately deleted as the experience doesn’t match the advertising sizzle.

US outfit AppOnboard hopes its latest deployment will go a long way to solving such problems, however, and ensuring a higher quality player too.

The underlying reason for this confidence is its patent-pending technology, which enables players to start playing a predefined element of a mobile game immediately and, as the company likes to describe it, in “full fidelity”.

The main reason, however, is the positioning of this technology as a Try Now button, directly to the left of the Install button on an app’s or game’s Google Play Store page.

“All traffic for a mobile game, whether organic or advertised, is funnelled to that one place, the app store Install button,” explains AppOnboard’s CEO Jonathan Zweig.

“Now, on Play Store, you can experience the game immediately.”

Our vision is every app will be demoed before being downloaded.

Of course, this sort of solution has been around in various configurations for a number of years. Indeed Google launched its Google Play Instant initiative, of which this project - officially (and confusingly) labeled “App Store Demos” - is another iteration, in May 2018.

Zweig argues it’s different this time, not only because of tight integration of the Try Now button right next to the Play Store Install button, but because of AppOnboard’s technology, which runs the game as native code rather than HTML5.

This provides a better experience in terms of visuals and audio, and also means more complex gameplay can be supported, enabling a wider selection of games to be better demoed.

There is an overhead associated with this, though. For example, Google has had to increase its cap on the size of such executables from 2MB for Instant Games to 10MB.

Similarly, the slices of gameplay are custom coded by AppOnboard’s engineering team using its own game engine. That typically takes around a week, although the process is speeding up.

One secondary advantage of this approach is developers get access to analytics in terms of how player interact with the demos, including a neat touchscreen heatmap so they can see where people are tapping.

To-date, Zweig says it’s been working with majority of the top 200 Android developers to ensure there’s plenty of availability, with Scopely, Jam City and Huuge Games companies happy to talk about their involvement.

Scopely is using the tech to encourage players to pre-register for its forthcoming squad RPG Looney Tunes: World of Mayhem, while Jam City says players who downloaded its match-3 game Panda Pop having tried the instant demo had better day 7 retention by around 30 percent compared to those who just installed it.

Non-gaming apps such as Simple Habit Meditation are also now using the tech.

That sort of uplift, if widely repeated, is significant and should ensure plenty of interest in App Store Demos, although a follow-through to monetisation will also be required if the approach is to be widely adopted.

Zweig says developers don’t pay anything upfront and get their first 30 days of deployment free but then a licensing fee will kick in. It’s not clear how Google gets its cut of the action but presumably it also gets one.

Still, given the active, ongoing debate about the value of app stores to the wider mobile ecosystem, Google’s adoption of what is a thirdparty technology does go to demonstrate the company’s commitment to keep improving its distribution platform, if only as a way of reinforcing its 30 percent revenue cut.

Zweig won’t comment directly on that, of course, but he does praise Google’s enthusiasm for the project.

“I think it’s being super disruptive to the current discovery model,” he says.

“It shares our vision that in time, every app will be demoed before being downloaded, because that provides a higher quality user for developers.”

You can find out more information about what AppOnboard is doing via its App Store Demo webpage.

Google is one of a number of companies that will be in attendance at Pocket Gamer Connects Helsinki on September 11th to 12th. Head to the website for full details about the event.