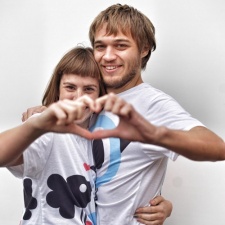 The trials and tribulations of love is a concept that is seldom explored in video games, or at least full-heartedly.

It’s a kind of novelty though that can endear a game to many and made Mountains’ Florence so vivid among other titles in the app store.

Centring on a millennial tale of life and falling in and out of love, Florence explored feelings of regret, warmth and sadness in a way that would have no doubt struck a chord with many.

Triple Topping Games' precision platformer Spitkiss is another that delves into love but is more interested in the kind of romance that few may have experienced, but many have trouble understanding.

Set for an October release following just over a year in development, the Danish studio sought to dive deeper into gamings untapped well of inspiration.

A different kind of love

“It’s about open-relationships, we worked a lot on creating a story that was different from the usual kind of stories you would see in a game,” Triple Topping Games’ CEO Astrid Refstrup (pictured main left) tell us.

“We also worked a lot on having characters that don’t have any gender.”

The desire to explore polyamory comes from a place of experience for Refstrup and creative director Simon Stålhandske (pictured main right), as both had lived in separate open-relationships previously.

“We thought it was an interesting subject and also something you may have a lot of questions about,” says Refstrup.

We thought it was an interesting subject and also something you may have a lot of questions about.

“People have a lot of ideas about why and how and ‘maybe it’s because you don’t really love each other and what is this thing.

“Working with Morton Brunbjerg, who wrote the story and is in a monogamous relationship, we tried to explain that it was just about being in love with more than one person and having a lot of love to share.”

You’ll find yourself in the life of Ymer, a non-binary character who is set to go through the ups and downs of open-love, from feelings of affection to bouts of jealousy.

Each panel pops with bright colours from pinks and yellows to blues and greens, with some navy thrown in for some contrast here and there.

According to Refstrup, the comic medium allowed the team to throw together some collective influences that extended to visuals and writing styles.

Having it as a comic strip really allowed us to mix things we like to read.

“Having it as a comic strip really allowed us to mix things we like to read,” Refstrup explains.

“There are calls to anime and a comic book style, and so on and so forth, I guess we just put all the things we like in it.”

An appreciation of anime isn’t the only form of art the team appreciates from the East, with Hayao Miyazaki’s 2008 film Ponyo and even K-Pop other influences.

Hit me with your best shot

Levels of the game unfold inside the body of Ymer, and each stage takes place in different internal organs. Small mazes separate the characters from each other in each stage and you’ll find yourself tasked with spitting a kiss from Ymer to their love interest.

The deed requires some quick reflexes and should your wad of spit slide off the wall it’ll break and you’ll need to start again.

Beyond our visual description of a spitkiss, Refstrup explains the concept forms a sort of meta-narrative and represents the trickiness of navigating an open relationship.

“If you imagine that you lived inside somebody’s stomach that you loved but you were stuck so you couldn’t move, then you would have to spit to the other person to communicate,” she explains to us.

While there is a comic element to the game, however, it’ll be a contained experience with no other comic-like additions coming in the near future.

Beyond that, Refstrup says the team is eager to carry on and to have fun with its projects.

“We just want to be a small studio where people can relax and have fun, make good games they were dreaming about doing.”

How do indie developers address accessibility in video games?

How can indie games developers make the most out of GDC?