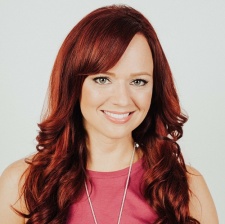 Andrea Rene is a host, producer and writer who co-founded the games podcast What's Good Games and acts as its executive producer.

Andrea Rene is a host, producer and writer, who has been part of the games sector since 2008 (going full-time in 2011), making a name for herself as the ‘busiest lady in the business’, with credits including Yahoo Esports, IGN, Gamespot, ABC, Viceland and more.

The latter group was formed in 2017, with a goal to bring together 30 years of expertise to discuss the most important topics in games. Rene runs the day-to-day operations of WGG, which can entail anything from hosting and editing to post-production and sound mixing, all alongside her co-hosts, Kristine Steimer and Brittney Brombacher.

During WGG’s recent visit to the UK, we spoke to Andrea Rene about her thoughts on the mobile industry, if Apple Arcade will shake up the market and her 12-year experience of surviving in the games industry.

What I love most about the mobile games business is that it’s so accessible and that anybody interested in video games at all can get into them.

What are your thoughts on the current state of the mobile market?

I think mobile games are more diverse than ever. The idea that there are over 300,000 games on the iOS store alone is a little mind boggling.

What I love most about the mobile games business is that it’s so accessible and that anybody interested in video games at all can get into them through mobile gaming because they don’t have the complicated input controls that you would get in PC or console games. All you have to do is tap the screen.

Is there any particular mobile game in 2019 that has stood out for you so far?

Is it weird if I say one of the things I’m most excited for is The 7th Guest iOS remaster? It’s such a dumb game but I have such nostalgia for it.

The game I’ve been playing the most on my phone has been Kingdom Rush Vengeance, which I know is technically a late 2018 game. It’s tough because discoverability has always been a major issue for mobile games developers is reaching their audience.

This idea that there are hundreds of games released per day, thousands of games a week, the ability for developers to find people who like their games and for gamers to find those developers in return is increasingly more difficult.

I’m really intrigued to see what Apple in particular is going to do with Apple Arcade and how that is going to solve some of these issues.

How big of a change on the industry do you think Apple Arcade will make? What are your thoughts on the concept?

There’s still a lot of unknowns surrounding Apple Arcade. The price is going to be a defining factor on whether it succeeds or fails. So many mobile games work off the free-to-play model that when you talk about a subscription that you have to pay for every month, on top of all the other subscriptions in our lives in 2019, you really have to weigh up what you’re getting for that price that you can’t get for free.

I think that Epic is really paving the way for all publishers to say we can absolutely do better.

I think Apple are really going to have heavily rely on the reputation of the developers that it is working with – of course they’ve announced some of these developers but I would also like to see what the library is going to be.

Apple saying there is going to be 100 new and exclusive titles is impressive but that’s still a lot of games. If you think about it, 52 a week a year means I’ll have to be playing two mobile games from Apple Arcade a week in order for me to be fully maximising my subscription. That’s a lot of video games.

Do you think the 70/30 split in revenue on developers is still justified for the App Store and Google Play, considering the ongoing discussion with Epic and Steam?

Obviously, Apple has had its history of fights with developers about the platform fee. I’ve talked to some developers personally that have been very frustrated by the cost to publish on mobile, whether that be Google or Apple.

I think that Epic is really paving the way for all publishers to say we can absolutely do better. But Apple is also in a position to say we have the dominant platform in the US, while Android can say we have the biggest platform worldwide and to publish here this is the cost of admission.

Unfortunately, Epic can’t say the same thing so in order to compete with Steam it had to offer a better revenue split. Obviously that revenue is split is not just because of Steam, it’s because Epic wanted to help developers but that’s a whole separate issue for a different conversation.

When it comes to the revenue split, I really hope that those platforms re-evaluate and say maybe if they make it 80/20 that it will help developers that are smaller, and maybe bring experiences to players of all ages that they never would have played before. I’m hoping they consider it but I’m not holding my breath.

You have 12 years in the games industry and have garnered the nickname of “the busiest lady in the business”. What are the most important lessons you’ve learned during this time?

Some of the most important lessons that I’ve learned over my years in the games industry is that it’s a very small business. Always treat everybody professionally and kindly.

People will remember when you behave unprofessionally and if you don’t conduct yourself in an appropriate manner - you can burn a bridge quickly. People remember. As I said, it’s a small industry.

Some of the things I’ve learned that are important is that you have work incredibly hard every single day. There are so many people that want to be in the video games business, whether that be on the media or development-side who are hungry for it, that if you don’t have the passion somebody will take your place.

I’ve also learned that if I wake up in the morning and decide that I’m no longer excited about this, then it’s time to get out because it’s a really cool job what we get to do. It’s a little surreal. Let’s not mince words, we work our butts off. Still, it’s a really cool job even if my parents have no idea what I do.