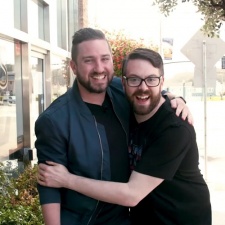 2019 is looking to be a memorable year in the history of mobile games for a number of reasons.

Whether that be Apple Arcade breaking down the door for premium subscription game services, free-to-play continuing to dominate the market, or the introduction of streaming to the masses, a lot has happened over the last year. And this looks to continue into the New Year, with further alternative services debuting on mobile platforms.

To celebrate the end of 2019, we at PG.Biz have been speaking with all manner of developers and publishers about the past 12 months. To change things up a little, we took the opportunity to speak with game influencers and podcasting pros Kinda Funny during their recent visit to the UK as part of a 'World Tour' to meet with fans.

Starting out their careers as part of IGN, Kinda Funny was established by four-game veterans from the outlet in January 2015, creating two channels on YouTube: Kinda Funny and Kinda Funny Games. Nearly five years on, the group now possesses over 4,000 supporters across two Patreons, over 240,000 subscribers on each channel, and has hosted its own E3-style showcase to spotlight more than 60 independent games.

With so many subscribers to appease and a deep investment in the indie community, it's only natural that the Kinda Funny team would have played a lot of games in 2019. But which mobile titles held their interest most?

"It's so good and addictive. I can't believe how it's got its hooks in people the way it has. Mini Motors is another game. In general, the success of Apple Arcade of how crazy it was, literally going from, 'I know there are good mobile games out there', to when I'm I going to have time to play Neo Cab. I've played Neo Cab at events and now I have it on my phone/iPad and I can’t wait to start it."

"Kingdom Rush Vengeance, which came out late last year, is the game I've put the most time on mobile into this year," says co-founder Tim Gettys.

"Also, I'd like to give an anti-shout out to Mark Kart Tour. That took up too much of my time, yet it could be so much better."

The explosive debut of Apple Arcade has certainly offered a new avenue to mobile games for those who don't want to engage with the free-to-play market. But does Apple's subscription service actually have the ability to survive in an F2P-dominated space?

"If it's here to stay is a different question and hard to answer because I don’t know what Apple's barrier for success is. I would say, obviously we have a couple of years with it for sure, but I'd like to think it stay around longer."

"My friend visited and he was talking about how he hated the microtransactions in this mobile game and I introduced him to Apple Arcade," Miller continues.

There are pockets of my life when I am hooked for months on end and that’s to do with the microtransactions, where I’d rather it be the quality of the game.

"It's like Netflix, you give them money and you get all these unlimited games in return. I think they're doing a good job of putting more games out but they do struggle to let you know new games are out."

Gettys adds: "I hope it's here to stay. For all the reasons Greg just said, the value and addiction level of mobile games is so high that I want those things to be together in a good way."

"I love mobile games. I play a lot of them. There are pockets of my life when I am hooked for months on end and that’s to do with the microtransactions, where I'd rather it be the quality of the game."

One thing that looks to be staying for the foreseeable future is the toxicity surrounding the games industry. Even seemingly innocuous changes, like Pokemon Sword and Shield not featuring every Pokemon to date, saw developer GameFreak receive a heavy backlash from vocal, angry fans.

When it's so easy to use all this negativity to drive views, how do you not get caught up in the mayhem? Kinda Funny believe it's all about the messaging.

"I feel it's a combination of not getting caught up in the toxicity yourself while being able to discern the crux of the issue of what people are mad about and how that actually affects the product," says Gettys.

"Then by being able to report on that, discuss and editorialise in a way that isn’t lumped in with the rapidness of the anger - but also find positive aspects of it all - and balancing that with the realities of the issues at hand."

"It's going beyond the headline," adds Miller.

"That’s the struggle. You talk about our numbers on YouTube, I think that's one of the reasons why we don't have astronomical growth is that we're not going to be negative for the sake of it. I hate 'Hot Takes'. The idea that everyone thinks you should have one and how people become big off of them. A 'Hot Take' is often so wrong and from the wrong place."

This approach gives Kinda Funny time to fully explore new games and tech before they come to their conclusions - good or bad.

For example, Miller was a strong proponent of Google's streaming platform Stadia on its run-up to launch, purchasing one of the Founder's editions himself. And, like most early investors, he wasn't impressed with what he got.

"It's too soon to say it's out of the race but it really has stumbled out of the blocks, doing every cliché you can think of. That is a very hard thing to overcome. Perhaps your first impression isn't insurmountable."

The problem with how Stadia dropped the ball was that it didn’t do it to everyone, but to the hardest of the hardcore.

But despite these initial failings, Gettys feels that Google hasn't completely failed yet.

"Google Stadia is kicking the door open for other people to come through," he says. "When you look at [Project] xCloud or whatever PlayStation's version of this is - streaming works. It also doesn't work. How do we make it work where the mainstream understands?"

"The problem with how Stadia dropped the ball was that it didn't do it to everyone, but to the hardest of the hardcore," says Miller.

"A year from now, if we get there and the triple-A titles are dropping on Stadia day and date, well that's a super, sexy, cool product. Will it be marketed and messaged the right way? Will it resonate with us? Will xCloud already be there? There are a million different things. Next year will be the most fascinating console service race we've seen in the history of video games."

"It's all about marketing. It's all about coming up with simple branding, whoever can own that it just works they are going to win."

Interested in influencers and marketing your mobile games in general? Come to Pocket Gamer Connects London 2020 on January 20-21 2020 to find out about this and much more!