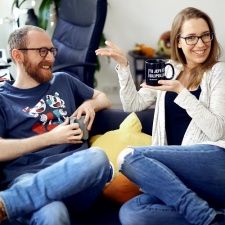 Valeria Castro is the CEO and co-founder independent studio Platonic Games that resides in Madrid, Spain.

This week, we talk to Platonic Games co-founders Valeria Castro and Álvaro Gutierrez about leaving their full-time roles to form the studio and why kawaii games are their speciality.

Álvaro Gutierrez: We met while working together for a bigger company on mobile sports games. At lunch breaks, we usually stood about imagining what wonderful games we could create together.

Eventually, we started developing one of them in our free time. We worked really well together on the project and a real possibility to make this full-time seemed possible, so we decided to leave our jobs and begin that adventure.

At lunch breaks, we usually stood about imagining what wonderful games we could create together.

From the beginning, we worked from home and decided to tackle the kawaii (cute) market because of our love for it. This really suited both of our super-polished developing styles as well as our lively designs. Some years later, our games were able to sustain growth so we opened our first office and started hiring.

Valeria Castro: We’ve read other Indie Spotlights and there seems to be a pattern but our typical days don’t really exist. Every day is radically different, you never know what to expect when you turn on the computer in the morning.

Valeria Castro: Enduring the first year’s desert, hands down. Even our most moderate expectations became wildly optimistic delusions when we faced our original launch. Looking back, it’s impressive to see how stubborn we were. Every day we finished with bad results but it never managed to bring us down. Better days eventually came, we grew as a company, and we’re still here - developing every day.

Álvaro Gutierrez: Platonic Games is an ambitious company, so there’s no final success until world or galactic domination. Not to put ourselves out of reach we always set up achievable yet difficult goals.

Reaching 10,000 downloads, then 100,000 after that. Followed by hiring an artist, getting featured on the App Store, doing better than competitors and growing the team to the size of 10, etcetera.

Success for us is to keep hitting our goals game after game. There’s also the reality of making a living from our games, which is an important milestone for any developer.

Valeria Castro: Of course, like everyone we find it overcrowded. That makes it so much harder to start up and to become truly established in the mobile market. But there’s a lot on the good side of the situation: we would not be here if the mobile market wasn’t so democratic and affordable for small teams, we are part of that crowd.

Our development team is bigger and stronger than ever, so we’ll be pushing the size/number of projects further.

Also, it’s a market that includes many more player profiles than other video game market. This means much more audience, revenue and diversity to pull from. You can see that our game catalogue targets players that didn’t exist as such until some years ago when technology put a smartphone in the pocket of billions of people across the planet.

Valeria Castro: It’s going to be our biggest and riskiest project so far. We are developing our own approach to bring new players to role-playing games. That means tearing down the whole genre and bringing it back together in a way that someone who has never heard of what a modern dice roll or a skill-tree looks like can come onboard.

It’s a super fun and interesting genre that usually stays in its comfort zone and plays in favour of more experienced players. Simplicity has proven complex to reach: it’s not an easy project, especially when you love old good RPGs like we do. There are tough decisions and sacrifices to make, but we hope we’ll deliver a lovely and fun hyper-casual RPG as soon as possible.

Valeria Castro: Our development team is bigger and stronger than ever, so we’ll be pushing the size/number of projects further.

We’ll keep working to be a kawaii game referent worldwide, and it’s safer to expect us stepping outside of mobile/video games into different entertainment industries than to expect us trying styles other than cute/kawaii. That’s something very imprinted in our DNA.

Also, we want to take our first steps into publishing too. Platonic Games is a whimsical company though, so if we fall in love with a particular idea we may very easily change plans.

Álvaro Gutierrez: That’s a very good question and one we’ve never been asked. We have a 50-plus idea list, which includes many for if we become a “Blizzard-sized company”. We’d totally aim for those ones. Not entirely sure but it would be something like an MMO that was mega-customisable and surrounding kawaii. We’d invest in merchandising too.

Valeria Castro: Concentrate on small games and make sure you finish them. Be aware of the development costs and times, and use it to choose the scope of your game wisely. We have a saying in Platonic Games: ideas are cheap, production is not.

This is a complex and unpredictable world, so while there are wonder hits, very good games do prevail. Maximise probability by doing more small, good games and hope for at least one of them to work out in the market.

From there it’s way easier to build up development power to expand and make the games that suit you best.