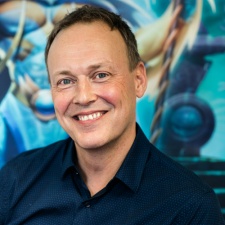 Founded in 2014, Small Giant Games was one of a flurry of Finnish start-ups that emerged just a few years back.

Headed up by the former CEO of Habbo Hotel developer Sulake, Timo Soininen, the team set about developing its first game, Oddwings Escape.

That title was a failure when it launched in 2015 and left the team looking for another game to start generating revenue for its declining bank balance.

But the studio didn’t have much time on its hands. For its next game, it had four months to prove the game was worth continuing on with. If that was to fail, as Soininen puts it, “we probably would have had one more shot on the goal”.

“It's a difficult situation trying to raise money if you don't have something tangible,” he tells PocketGamer.biz.

But that penultimate game, as it were, was the match-three RPG Empires & Puzzles. The team might not have known it then, but that title would completely change its course from a small start-up whose debut had failed to a developer behind one of Europe’s most successful game releases in the past few years.

It eventually led numerous admirers - with the company nearly sold back in 2018 - before Zynga eventually snapped up 80 per cent of the studio for $560m at the end of that year.

It joins a company that houses studios including NaturalMotion and Gram Games, and one that was ranked number one on our Top Game Makers for 2019 list (you can check out our interview with Zynga's president of publishing Bernard Kim here).

Creating their own luck

All that success so far has come after the studio conducted its own internal research on potential openings in the market that it could exploit. It identified a space in the ‘advanced casual’ category, between casual and even midcore.

Soininen explains that in the team’s view, the midcore games on the market back in 2016 were “insanely difficult, a design flaw from our perspective”, while onboarding in these titles was also challenging for some users.

“We said, hang on a minute, could we actually bridge the gap between casual and midcore and create a game that would actually be welcoming, with enough handholding,” he says.

“A lot of colleagues and friends in the industry said ‘hey guys you're doing it wrong, it's too long, your tutorial is too long’. But the numbers were telling their own story.”

Soon the team realised this game could be successful and after four months looked to quickly take the game live with what Soininen says was a “very incomplete version”.

“Our eyes hurt,” he jokes, but the players still liked the game and started spending. “That gave us the confidence to go, okay, let's go full force with this one.”

It's a difficult situation trying to raise money if you don't have something tangible.

Soininen says the team already had great competence in performance marketing and analytics, and was building its own analytics stack alongside Empires & Puzzles.

“Without that you're completely in the dark and you don't know what's going on,” he states.

One thing it wasn’t so great at however was user acquisition. But after convincing an early investor to back the studio again, it went about looking for “the best people on the planet” to run its UA campaigns.

Small Giant went on to raise $5.7m in 2017, and a further $41m in early 2018. The latter came after it decided not to sell straight away. It wasn’t just the founders getting money though, each member of the team had a stake in the company.

Small Giant was not so small anymore, and at this point continued to quickly scale up the business. By around August 2018, Small Giant was again attracting calls from admirers looking for a big get in an industry in the midst of consolidation.

One of those admirers was Zynga, which had already splashed the cash on a few acquisitions.

Soininen says one of the attractions for joining Zynga was its philosophy on how a collection of individual teams can be creative and flourish.

“The operating model at Zynga is not that you try to force-feed one culture, that everyone wears the same hoodie and everyone has to do the same thing,” he explains. “That's the old fashioned model, the way that has almost never worked. We see so many examples of companies doing that.

“...we have an independent creative culture, our ways of working are so efficient that it's very difficult for anyone to come in and say ‘let's do it better’.”

Soininen says that Zynga offers a “smorgasbord” of different services, so if the team needs help in areas such as analytics, UA, ad monetisation, etcetera, it can all upon the publisher’s expertise. But the leadership at Zynga entrusts its studios to do what has already made them successful and an acquisition target in the first place.

Now that Empires & Puzzles has become a top grossing game in Western markets, Small Giant has been expanding it to the East, where it has launched in South Korea and Japan. Soininen says it has peaked at 17th on South Korea’s Google Play Store.

App Annie data shows the title has become a regular top 50/60 grossing game in the country, while it has also peaked in the top 100 in Japan.

It's an ever-changing world and it's such a growing market that there are a lot of opportunities, so it's really inspiring I think for all of the indie studios.

“Generally speaking, it's a really good, nice trajectory,” says Soininen. “Still, there’s a lot of work to be done, but it's quite remarkable because you know, it is, after all, a different type of market.

“And it doesn't make any sense from a developer's perspective, because you have that asset, you have that game and you just need to find the audience. Those markets are so big that you can find an audience that's likely to like a Western game like that.”

The Finnish studio is also pushing forward with another game, the in soft-launch Puzzle Combat. The title looks very similar to Empires & Puzzles, though Soininen insists it’s not a reskin. He states there’s currently a good chance the title will get a global release by the end of the year.

Small Giant hasn’t exactly come from nothing - it has an experienced team behind it and has attracted big backing - but it’s an example once again of how small teams can hit the big time, even after failure.

“It's an ever-changing world and it's such a growing market that there are a lot of opportunities, so it's really inspiring I think for all of the indie studios,” says Soininen.

“All of a sudden you can be one of the big boys, even though your name says Small.”

Timo Soininen will be a speaker at Pocket Gamer Connects Helsinki 2019, which takes place on October 1st and 2nd.

Reply
Carter Tommy
I'm sorry but I find your tournaments unfair and biased. I don't see how you can sleep at night knowing that such an unfair Advantage you give other players. When it's clearly obvious the only thing you give a damn about is money
Posted 2 years ago