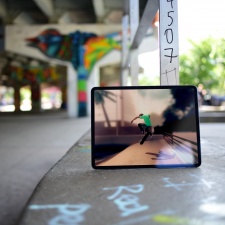 Andrew Schimmel is the senior producer at independent studio Snowman

This week, we spoke to Snowman founder Ryan Cash and senior producer Andrew Schimmel about how to market your mobile game to the right audience and why Apple Arcade was the right move for their latest project, Skate City.

Ryan Cash: Snowman released its first app (Checkmark) in 2012. Myself and Jordan Rosenberg co-founded Snowman and set out to create functional apps that harnessed the power of iOS to help make organising people's lives just a little more pleasant. That sentiment carried us into making our first game, Circles, which was our video game 'spark'.

Circles was visually simplistic but designed to keep minds sharp as the game challenged players to remember and tap patterns formed by glowing, multicoloured rings on the screen. While Circles was easy to learn and appropriately challenging, the game seemed to not keep players engaged for very long.

Being avid snowboarders and skateboarders, Jordan and I wanted to make a game that would capture the feeling of riding down a serene mountainside.

Andrew Schimmel: Working at our studio is really fun. With such a small team you get to know everyone quite well and contribute in a wide variety of ways. In any given day I'm usually jumping around between three projects while approaching different sides of each one. In one instance, we might be working on the level design for a new map in a game that involves a lot of research and creative collaboration.

In any given day I'm usually jumping around between three projects while approaching different sides of each one.

Next, you'll find yourself sitting down to discuss business development for another title before bouncing over to a marketing brainstorming session for yet another game. All before adjusting project schedules and tracking delivery goals. It's an incredible learning experience to see and work on so many sides of moving, evolving things.

Ryan Cash: Learning how to make a good game is not the same as making an app. Through transitioning between the two, we came to understand that apps are more logic-based while games are heavily based on feeling.

I've definitely grown to love making games a lot more than productivity apps – they're more creative, and they're based on gut feeling rather than simply logic. That being said, occasionally I miss the simplicity of designing something that essentially sets out to solve a problem and you kind of have a yes or no answer at the end of it (compared to a game where you never truly know until it's in the hands of your players).

While it may be more difficult to measure the success of a game in such an absolute manner, it's the responses of players who've formed genuine connections to the games that make it all worth it.

Andrew Schimmel: From a business standpoint, we need people to play our games so that we can keep making them, so sales and downloads obviously mean a lot to us. It shows that people see value in what we're making and are willing to support us to continue doing so. We appreciate it so much.

From a more personal point of view, if I had to distil it down, I'd say success is probably the feeling of accomplishment. That can be a combination of feeling rewarded by results, as well as appreciating what you’ve gained from the process.

If you've set out any type of goal for yourself to work towards, and it's one that really challenges you, then you're going to put yourself through the paces to achieve it. At the end of that experience, if you reflect on the result and it resonates with you (and maybe even others) it can be incredibly rewarding.

Ryan Cash: It's an exciting time because as more games are being made and genres are expanding, new audiences are discovering games that resonate with them despite never having identified as a "gamer".

The barrier to entry is also becoming increasingly lowered now that playing a game can cost less than a latte. In the past, many potential players could not access games as they could not afford the console or were unfamiliar with the hardware.

Mobile phones are already so integrated into our daily lives that associating games with these devices is practically seamless. Services like Apple Arcade, which gives you access to 100 plus games for $4.99 a month, are giving people who didn't know they'd love games the opportunity to discover gaming through an inviting platform that feels familiar like the App Store. We can't wait to see how the medium of mobile gaming grows as more people become acquainted with it.

This growth in audiences combined with a service like Apple Arcade allows for indie studios to take more risks without letting the monetisation model be a determining factor in the gameplay. In the end, we all win!

Could you tell us about Skate City?

Andrew Schimmel: The game is a creative collaboration between Snowman and our Norwegian development partners at Agens. Our studios teamed up with the goal of bringing a new mobile game to the genre that could capture the heart and soul of street skating in an authentic light.

Some three years and change later we had pushed that original vision to include controller support and more console-reminiscent features launching the game in its current form on Apple Arcade.

Our team aimed to create an experience that embodied the feeling of skating through city streets with a smooth and effortless flow. One that emphasized the style in true-to-life tricks that skaters would relate to while opening up the genre to a much wider audience.

Ryan Cash: We can't get into specifics, unfortunately, but we're fortunate that Snowman has built a great relationship with Apple over the years. I believe we share similar ideologies for design, and this has translated into games for us.

When we made Checkmark in 2012, we had no idea we would be making games but this endeavour combined with our prior knowledge of the App Store really solidified our relationship with Apple when we released Alto's Adventure.

In 2018, Alto’s Odyssey was awarded the Apple Design Award along with nine other games and apps. To be recognised by Apple for this validated our belief in creating products whose impact is felt beyond its intended purpose.

For anyone just getting started: I believe if you make something great and do a good job telling people about it, Apple will eventually take notice.

Andrew Schimmel: We're really excited about some of the updates we're working on for Skate City. We can't share much at this stage but it's neat to think about how this game can evolve within a subscription service. It's new territory for us.

Ryan Cash: At the core of everything we do is the desire to make games that people may sit with for a short time, but linger with them for a long time after. With unlimited resources, we would make ambitious, immersive, experiences that impact how players view games and understand their place in the world.

Big ideas require big talent and with an unlimited budget, we would love likely expand our team and collaborate with even more innovative minds who also share our passion for making artful, meaningful games.

Ryan Cash: Figure out what your values are, what your vision is and stick with it. There are many points in development where it is tempting to stray from this which can make for a confusing and diluted version of the game.

That being said, you also need to know when to not be precious about your decisions. For instance: there may come a time where it is best to sacrifice certain elements of the concept for a better gameplay experience. Making a great game is essential but it doesn't end there. Making a great product is only half the battle. The other half is marketing your product, whether it's a game or a calculator app.

Additionally, it's important to regularly maintain relationships with players and anyone who has shown support towards the projects - especially from its early stages. From day one, creators should be letting future players into the world of the game so that by launch, there is a dedicated community eager to engage.