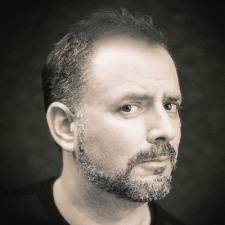 When EA acquired PopCap in 2011, it wasn't a surprise Jason Kapalka left the company he had co-founded three years later.

After all, Kapalka was PopCap's chief game designer, working on such acclaimed titles such as Bejeweled, Plants vs Zombies and Peggle.

"Being at PopCap was like being in an arena rock band," he recalls.

"It was a large enterprise, 600 people globally. There was the pressure of 'Is this going to be our next billion dollar franchise?' I always said 'Maybe'."

He didn't know what designing a billion dollar games was like ahead of time even though he'd been involved in several.

Continuing the arena rock analogy, he explains "I quit the band to play crappy experimental jazz in small suburban towns".

And - interspersed with other business ventures - this is what Kapalka has been doing ever since 2015 with his new studio Blue Wizard Digital.

Focused mainly on web games, Blue Wizard has released some odd titles, especially in what can only be described as the 'oddly humorous horror genre'.

Notably, despite their names, Slayaway Camp and its licensed sequel Friday the 13th: Killer Puzzle are sliding puzzle games.

But it's been egg-themed first-person shooter Shell Shockers that's shaping to be the closest thing Kapalka has come up with in terms of his next 'next billion dollar franchise'.

"It's eggs with machine guns. It's fun," Kapalka simply says.

He recalls an early version of Plant vs Zombies that used realistic weapons.

There's a high death rate in the game, which is convenient in terms of being able to show a lot of ads in a non-instrusic manner.

"The feel of that was wrong," he says.

"Shell Shockers is a web game so it's got a young audience, but it's eggs not people. We can use realistic guns and the violence doesn't seem so bad."

And it's certainly gaining traction. Through CrazyGames, which just one of its distribution channels, it has over three million players and has racked up over 35 million game plays."

Another interesting game design aspect is because all the players are represented by eggs, it makes sense that characters are fragile, with low health points.

As ever, the big issue with web games and their young credit-card-less audience is the only way to monetise is to drive scale and get as many ads in front of those eyeballs as possible.

But this is hard to do without breaking the game experience and a game that can only show an ad every ten minutes just isn't going to work commercially.

That problem is solved in Shell Shockers.

"There's a high death rate in the game, which is convenient in terms of being able to show a lot of ads in a non-instrusic manner," Kapalka points out.

Which brings us to the mobile version of Shell Shockers which is out now on iOS and available for pre-register on Google Play Store.

"It will be interesting to see how much of our web audience we can bring across to mobile," Kapalka says.

Of course, the game is synced across mobile and web so people can play from any device.

But crucially the mobile version enables Blue Wizard to add IAPs, even if they are purely for aesthetic items such as special guns and masks plus a soft currency to buy hats, skins and decals.

"You need to design around the monetisation model and on mobile we can tilt it with fewer ads and more IAPs," he says.

Maybe the next billion seller isn't on the card yet, but there is a path to the next few millions.

You can play Shell Shockers and get the mobile versions via its website.

Tap for Tap is back with ads in moments that matter