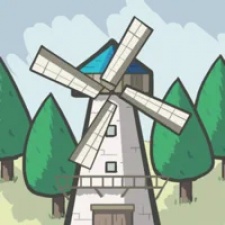 This week, Rycekube's Ryan Becijos details the tabletop inspirations for his first mobile release and the all-too familiar indie balance of part-time development and other responsibilities.

PocketGamer.biz: Where did the initial idea for the game come from?

Ryan Becijos: I had been exploring ideas already in regards to making a game that had some deckbuilding mechanics and wanted to incorporate some elements of city-building. I generally wanted some sort of strategic game that you'd end up with sort of a piece of art at the end. I'd drawn a lot of influence originally from board games including Dominion and Carcassonne, the latter being a great example of what a finished piece might look like.

While I think the initial idea could have been viable, the deckbuilding elements ended up being far too complicated. After simplifying and switching all of the deckbuilding elements into premade sets, this resulted in the game feeling too predictable. This is where I drew inspiration from the excellent game, Tiny Islands, to implement a mechanic that would force players into more unpredictable play patterns. I also liked the concept of drawing between your tiles, which allowed for more creativity than roads being pre-baked into the tiles as I originally had designed.

How long did development take and how many people worked on the game?

The game was in development for around 18 months and was mostly worked on by myself. I have a programming background, but needed to spend a lot of time practicing to be able to do the art for the game as well.

What have you enjoyed most about working on Square Valley?

Since the game is really focused on elements of randomness, I often enjoyed play testing with new tiles or ideas and seeing the different outcomes. The randomness element also helped keep the game fresh and enjoyable for me to play even after many many playthroughs. I also enjoyed looking at other players' creations during play testing: results were often either very close to what I envisioned for the level or completely unique and different.

I am only able to commit to working on the project part-time, so it is really a struggle when I cannot find enough time to commit to making progress on the game.

There were some periods where I would just get too busy with other personal things and it would feel like a really big setback at times. I would say it definitely was challenging to stay motivated working on a project part-time for so long, but I think it was worth it in the end.

How happy are you with the launch of the game so far?

On one hand, I am really blown away with all the positive feedback that I've been getting and about how much people have been enjoying it. On the other hand, there is also a lot of feedback regarding how complicated the game can be at times and a lot of bugs and minor wording details that keep people from understanding the gameplay. I would have liked the game launched in a state that wasn't so complicated or buggy for people.

But in general, I've been able to address it and I think overall I am happy with the launch.

What is your approach to live ops with Square Valley?

My approach will mostly be responding and listening to the community feedback. My main goal for Square Valley is to be in a state that has at least good quality of life features. I believe the community brings really great feedback in regards to things that make the game more accessible and I'm happy to keep contributing to that the more ideas that come forward.

I don't currently have any projects underway, but I do have at least two solid ideas that I will start prototyping once I have the time and energy again. I'm of course excited to get started on them right away, but with the current game just being released, I will probably spend some time getting Square Valley in a good place before I move on to the next projects.