The micro-studio will reignite a previous partnership 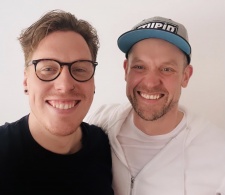 Laser Dog games was founded by Simon Renshaw and Rob Allison, with Renshaw working as an artist and game designer while Allison took charge of programming and composing. The two spent a year making games in their spare time, before devoting themselves to Laser Dog full-time following the release of its debut title, Alone.

Since then the studio has won numerous accolades for their games, including the Editor’s Choice on the Apple App Store for its game Ava Airborne.

Playstack is a London-based publisher partnering with both external and internal studios on game development. It previously partnered with Laser Dog to release Ava Airborne and 2 Grind 2 Furious, which combined have been downloaded over 13.5 million times.

"We’re so happy to welcome Rob and Simon to Playstack as full-time members of our team, and delighted to launch our first micro-studio Playstack Leeds. One of our core goals is to enable developers to focus on their passion for creating great games. Simon and Rob have already brought their boundless energy to Playstack showing a passion for creating, crafting, and shaping a new wave of games for our line-up. They bring so much joy to players and we cannot wait to work with them more and more," said Playstack CEO Harvey Elliot.

"Before we met Playstack, we were finding it difficult to focus on doing what we truly love, developing unique and quirky fun games. There are only two of us at Laser Dog and we found the day-to-day of running a studio a bit overwhelming, but with Playstack’s help, now we have the freedom to spend our time on creating the games we want to make," said Renshaw and Allison in a joint statement.