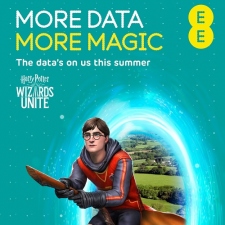 Niantic and British mobile network provider EE have partnered to bring a number of bonuses to Harry Potter: Wizards Unite players in the UK.

The deal sees all EE pay monthly mobile customers being able to play Wizards Unite as much as they like through inclusive data this summer.

Across the UK, several EE stores will appear in the game as sponsored Inns and Fortresses, offering users “unique bonuses and special assignments”.

These shops will also contain officially licensed Harry Potter PopSockets featuring Hogwarts Houses for half price, as well as £50 ($62.68) worth of in-game rewards for anyone that takes out a new Smart Plan.

Niantic previously secured a similar deal with McDonalds in Japan, which according to the firm resulted in 2,000 trainers visiting the premises each day,

“We’re the UK’s best network for gaming – so we’re the natural partner for Niantic on Harry Potter: Wizards Unite, allowing fans to get the very most from the exciting new gaming experience on the go,” said EE CEO of BT’s consumer division Marc Allera.

“With data on us and EE Inns and Fortresses to visit – EE customers can don their wizarding robes and lose themselves in the latest iteration of Harry Potter’s magical world.”

Wizards Unite launched in July and made an estimated $3 million from player spending in its first seven days of release.

Harry Potter: Wizards Unite launches in the UK and US this week