Social deduction title generated 78.2% of all downloads during August and September. 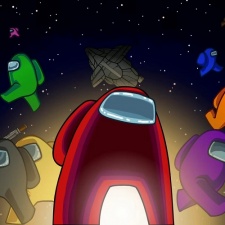 InnerSloth's social deduction Twitch hit Among Us has reached 120.8 million lifetime downloads on mobile, according to Sensor Tower.

Launched on June 15th, 2020, Among Us has seen a massive rise with influencers and social media playing a major part. Players in the US accounted for the largest portion of downloads at 24.7 million installs or 20 per cent of the overall number. Brazil then followed in second, while India placed third.

Interestingly, Among Us accumulated 94.5 million downloads or 78.2 per cent of its total installs during the months of August and September 2020.

Specifically in August, Among Us generated 18.4 million downloads, representing a ginormous rise of 655 per cent over July. This continued into September with 76.1 million installs claimed and a 314 per cent month-over-month increase.

Google Play represented approximately 69 per cent of all downloads, while the App Store made up the remaining 31 per cent.

While downloads surged, revenue has yet to hit the same heights, with Among Us making $11 million from player spending. However, this does not take into account ad revenue.

The US picked up the biggest amount again at $7.2 million or 65 per cent of the total. Canada then secured second before South Korea rounded out the top three.

App Store users accounted for 70 per cent of player spending, with Google Play grabbing the final 30 per cent.

Note: this data was tracked across the App Store and Google Play up until September 27th, 2020.

On the other hand, App Annie's installs estimation actually comes in lower at closer to 83.1 million downloads, though the analytical platform did state that Among Us has crossed over into the top five most downloaded games in Q3 2020.

Furthermore, it was confirmed that as of September 28th, Among Us has reached the number one overall download ranking in 124 countries on iOS App Store and 79 countries on Google Play.

Twitch and Discord have particularly seen an increase in usage as a direct result of Washington-based indie studio's title. Most notably, Among Us viewership skyrocketed by 650 per cent over September (via The Verge) and Discord mobile downloads grew to 800,000 installs a day.

Alongside Among Us, Fall Guys has become one of the biggest hits under the global pandemic. So much so, that a Fall Guys clone -  known as 'Fall Gang: Knockout' - went on to accumulate 81,000 downloads before being pulled from App Store.