Now open for preorder and pre-registration 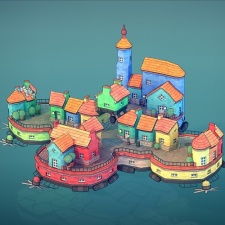 Townscaper involves players constructing colourful island towns with the developer describing it as "more of a toy" than a game.

The appearance of the placed blocks is dictated by various rules that can turn them into balconies, spires, arches, stairways and more without player instruction.

Other features of Townscaper are its low-poly graphics and minimalistic user interface to allow for simple gameplay.

Townscaper has sold more than half a million copies between PC, Mac, and Nintendo Switch.

Townscaper developer Oskar Stålberg previously worked as a technical artist at Ubisoft and a Unity developer at UsTwo.

Townscaper will be available on the App Store and Google Play for $4.99 (£4.49). The game is now available for preorder and pre-registration.

We previously spoke with Stålberg and co-developer Richard Meredith about the development of Bad North and the increased sense of security when releasing games on the Nintendo Switch.

Alien: Isolation heading to iOS and Android on December 16