Will launch gradually worldwide on iOS and Android 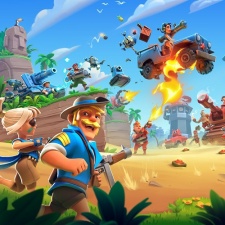 Boom Beach: Frontlines has launched on iOS and Google Play in Canada.

Multiplayer battles will include an array of units, such as tanks, towers and airstrikes, and also various characters that each have their own abilities.

In addition to battles, players will level up their HQ to unlock additional units, vehicles and power-ups and expand the loadouts they can take into battle.

Space Ape Games will provide a "regular pipeline" of updates to the game alongside constant map rotations to provide a "vibrant cooperative battlefield" on mobile devices.

The game’s predecessor, Boom Beach, was launched in 2014.

Similar to the previous game, Boom Beach: Frontlines will be free-to-play and feature in-app purchases.

Boom Beach Frontlines was originally soft-launched in June 2021 , with 15,000 players testing the pre-alpha across North America and Europe.

Players can pre-register and find out when Boom Beach: Frontlines will become available in their territory here.

Boom Beach is not the only Supercell title to be expanding its universe. The Finnish developer is currently working on three new entries to the Clash of Clans series, Clash Quest, Clash Heroes and Clash Mini.