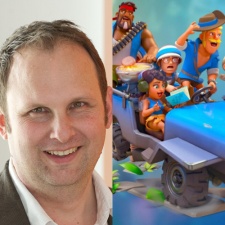 Space Ape Games is booming, and Supercell paid attention. With the explosive success of Beatstar, the developer’s most successful title to date, Supercell increased its stake in the firm with a further $37 million investment.

Not a bad way to acknowledge Space Ape Games’ 10-year anniversary, and the firm has plans to dramatically escalate its operations, including a shift in its exec board, key hires in marketing, ad monetisation, and an overall headcount bump of 20 per cent.

But, having spent several years locked in R&D mode, Space Ape Games is looking to revitalise its publishing and marketing functions – described as having “atrophied” during this R&D period – and built three Beatstar-equivalent titles.

Even the biggest mobile games developers have struggled to match its biggest titles, let alone scale up to three. But Simon Hade, founder and now-interim CMO/CXO following exec team shifts, is confident that the ups and downs Space Ape has experienced in the past decade will make this a reality.

Apologies for sounding like a stuck record, but it cannot be overstated how inconsistent mobile games hits are, even in a sector defined by a deep understanding of data, audience recognition, and psychological hooks. Three new titles that can match Beatstar is ambitious, to say the least. But Hade is unfazed.

“The quality of the ideas and the teams at Space Ape today is way more advanced than even a few years ago. We’ve just come out of nearly five years of R&D, during which time we experimented a lot with what to make and how to make it. Our upcoming slate has been built on those years of learnings from multiple attempts in each genre.

“The teams have grown stronger through that process and we now have a lot of pattern recognition about what good looks like at various stages in these genres. I wouldn’t say we’ve mastered any of the genres yet, but I’ve never felt more bullish on our slate than ever before.”

Among Space Ape projects include the Supercell franchise, Boom Beach: Frontlines, which is soon entering its second soft launch wave by expanding into 19 new countries and more than one million pre-registrations. Hade stated that “it’s built on the learnings of several failed multiplayer games, and many, many years of mid-core game development” and a team of Transformers Earth Wars and Rival Kingdoms veterans. He continued: “The bar for living up to the promise of the brand is higher than anything we’ve done before.”

Another project Hade wanted to discuss matches Space Ape’s serpentine history of genre-hopping, with a casual title in the works, led by “perhaps our fastest, most experienced team” with a litany of experience in multiple billion-dollar casual titles. While its initial investigations have yet to coalesce into a global launch, Hade stated “they produced a really strong foundation of tech and design learnings, as well as production expertise which means we can move really, really fast”.

But the true secret weapon, according to Hade, is the wealth of opportunities from Supercell’s involvement: “There is a great support network amongst the Supercell investee companies like Trailmix, Metacore, and individuals within Supercell who have deep expertise in the category.”

But the peak of Olympus for Space Ape – the top company goal for 2022 – is to “dominate the music category” by expanding on Beatstar’s success with new genres and game modes to reach divergent audiences. Hade stated “we’re only just getting started in music”, and following high-profile collaborations including with Black Eyed Peas to pre-release their new single within Beatstar, we’re inclined to agree.

Targeting a headcount of 200

Ambitious plans needs manpower. Space Ape’s headcount is currently 130, and while the developer is targeting an ultimate headcount of 200 in the relative future, Space Ape has taken “a phased approach to scaling” with nine new employees added in Q1 2022 and a further nine positions expected to be filled in this quarter.

[Boom Beach: Frontlines] is built on the learnings of several failed multiplayer games

Hade stated this approach was chosen, “having made the mistake of hiring too quickly in the past”, but has outlined priorities for further expansion in publishing roles, specifically marketing, production, art, data, and user acquisition, in addition to QA and people & ops.

Hade continued: “These roles are not currently advertised since we want to make key hires first – such as a marketing lead on each game, and a CMO – and then build the teams necessary to support the games. If Beatstar grows rapidly, or we have two games globally launching, then we could be as many as 180 or 200 people within the year.”

“This is in contrast to the past five years, when we were almost exclusively hiring for frontline development – coders, designers, and artists – in a time when many of our live operations and marketing people transitioned to new roles such as production and game design.

“Whilst that was great for the individuals to develop new skills, it meant a lot of our publishing muscles atrophied. So, it was a bit of a shock to the system when we suddenly needed to scale UA spend to millions of dollars across hundreds of creative per month.”

With this transition, several members of the exec team have changed responsibilities – Nic Walker has moved into the COO role, allowing Hade to focus on the publishing arm as interim CMO and CxO. Alessandro Simi has moved into the CTO – a position that was vacant in Space Ape during its R&D years, but Hade stated: “Now that we’ve come out of that phase with a few big bets, it’s important to bring back that company-wide perspective.”

The only exec position that will be fulfilled externally is the CMO, as Space Ape looks to take more ownership of brand building. Hade commented: “Historically, we have leaned on Supercell and agencies for brand direction, and have not had someone driving the more strategic aspects of that job. Brand and IP building is more important than ever so my main priority is to fill that role as well as appoint marketing leads for each of the games. Those will be a combination of internal and external hires.”

On the eve of layoffs at Niantic, Unity, and AppLovin

Space Ape’s expansion plans come at a time of fluidity – both as a skill shortage in the wake of a global pandemic that have recalibrated how people define work and opportunities, and as considerable layoffs at Niantic, Unity, and Adjust/AppLovin have been announced.

Space Ape has maneuvered in the face of remote and flexible work that has become popularised, if not essential, over the last three years, but it would be foolishness not to recognise the pattern of layoffs in the face of an upcoming recession. Hade stated: “No doubt the trends are very concerning. We’re already seeing spend and advertising revenue impacted across the industry, funding is going to be hard to come by and many of us have friends and family in businesses that are very sensitive to these market forces.

“However, for the stage we’re at, the biggest risk factor is internal, namely our ability to make a good game. One could make the argument that if you have a strong game, then now is a good time to double down since there will be less competition for ad space and game launches as everyone tightens their belts. It might influence some of our strategies on the margins, but mostly we are focussed on finishing off the games we have in development and scaling to support their launches.”

Hade is banking on successes, but is conscious that on the extreme situation that its releases fail to find their audience, being connected to Supercell comes with distinct advantages: “If none of them work and we end up in a position where we’re losing money, then that’s when being part of a hugely successful and largely recession resistant games maker is helpful.”

The health of long-term projects – and those involved

Much of what Space Ape is prioritising is an ability to capitalise on the years of R&D – publishing and marketing – but the developer is cognisant of the importance to keep a stream of new titles and opportunities live. But when asked about keeping its R&D arm alive, Hade highlighted the importance of new titles in not just bringing in new team members, but also in retaining its creators.

“Without a pipeline of new games, it gets very hard to attract and retain top talent, and no matter how big you are you are only as good as your next game. I speak to talented game makers in successful studios all the time who say they feel stuck on their live games.

“Sometimes this is because they were instrumental in making the game and so it’s really expensive to roll them off, which is crazy because that is exactly the kind of person you want making your next game. Sometimes they have become typecast and so are not given the opportunities to do something different.

Few developers have expressed the fatigue that can build when attached to a single project for many years, but Hade is upfront about the need to keep employees engaged: “It’s so easy to fall into that trap and, from our very first game, we baked this thinking into the technical architecture and design process of our games. We’re building games people will play for years, and that we want to manage as a service with continuous updates and changes. The kinds of people who love operating games are often quite different shapes to those who enjoy creating. It’s really important to recognize that and organize your business around that reality, else you lose good people.

“We cannot always give everyone exactly what they want, but we’re always having very transparent conversations with everyone and making sure everyone understands what needs to happen to move onto the kind of project they are most passionate about. We have forums for people who are earmarked to kick off a new game eventually to come together and discuss what the opportunities might be, but we will not kick off a new game until there is a complete team who are ready to roll at the same time. Once a team becomes available, then we arm them with the resources they need and trust them to figure out what the best idea to work on is.”