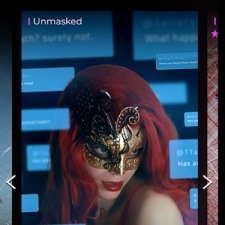 It’s been a busy year for gaming on Netflix, from Stranger Things to The Queen’s Gambit mobile titles, to the introduction of an ad-supported tier, to a number of partnerships and acquisitions; and the latest game-related addition to the company’s lineup is no exception – introducing a live-action crime drama played on mobile.

Branded as "a new category of digital entertainment", Scriptic: Crime Stories is a phone-first game where viewers become the detectives in a crime drama, aiming to solve the case. Ahead of its launch on Netflix, the game maintained a 50 percent completion rate of its initial hour-length episode and saw the vast majority (95 percent) continue into the next.

Netflix Games has offered a non-exclusive game before in Moonlighter, a title that originally launched on mobile in 2020 but was taken off app stores in February 2022, when Netflix entered a partnership with its developer 11 bit studios.

Of course, Netflix-licenced games had released prior to the establishment of Netflix Games, such as Stranger Things: Puzzle Tales. However, the game was later removed from app stores ahead of a rerelease on Netflix Games – similar to Moonlighter.

While Netflix-published mobile games on the App Store and Google Play had generated 13 million downloads by June 2022, the Netflix Games service itself has only managed to tap into a slither of the company’s audience. By August of this year, approximately 2.5 million players had tried out Netflix Games, equating to less than one percent of subscribers.

Perhaps wider access to ad-free games will be the way forward.