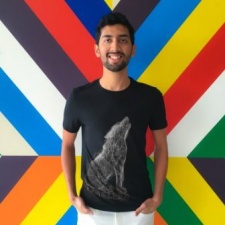 Chetan Surpur: I’m Chetan Surpur, and my little indie studio is called Highkey Games. My teammate and long-time friend is Eric Rahman, who handles the business side of things and advises me on everything from design to architecture to presentations.

We’re also working with a brilliant New York-based musician, Craig Barnes, who makes all the music and helps with the audio design for the game, which is huge, seeing as it’s a music game.

We’re all driven by the power of music to inspire, heal, and transform. We’re excited about the intersection of music and games, and we look for beauty there.

Music has been a communal activity since the beginning of mankind. During festivals and gatherings, everyone would get together and play music and dance together.

It didn’t matter whether you’d never played music before, or played it every day of your life so far. Everyone participated, since the only way you could hear music was if you made it yourself. But with the recent advent of recorded music, something changed.

A great divide formed between those who played music at an expert level and everyone else. After all, why make music yourself if you can just listen to professionals who do it way better than you?

Nowadays, people listen to the radio and think, ‘That’s amazing. I can never do that’. They are intimidated, and most go their whole lives never even trying to play music of their own.

Our game, Audio Sky, is about bridging that divide. We want everyone, and that means everyone, to have a taste of the beautiful experience of playing music. Audio Sky is a multiplayer music game, in which you make music and play music that other people have made.

It’s easy to make a song in Audio Sky - sequence a drumbeat by dropping notes on a timeline, and layer on a few musical loops, which are collectible items in the game. Then, once you have a song, anyone in the world can play your song by playing the drumbeat that you sequenced.

Audio Sky will be available on mobile, and eventually on Mac, PC and VR.

How hard is it to survive as an indie developer working in mobile?

It’s definitely a challenge, and a huge risk. I’ve been running on savings for over a year now, and if wasn’t for the modest (and surprising) success of our first game Orbit, I would probably be doing something else by now.

Being an indie developer feels like sitting on a ticking time bomb that you’re groping in the dark trying to diffuse.

Fortunately, I’m working with Eric, who understands monetisation in the mobile market. We’ve made it a point (since I initially stupidly released the first version of Orbit without a single monetisation hook) to think about the money from the very beginning.

Of course, we’re pursuing our passions with our new game, but if we didn’t design the game to make money from the start, we’d have no chance of pursuing our passions for very long. It’s no easy task to survive as an indie developer in mobile, but I at least feel like we’re giving it a good shot.

In fact, we have the honour and pleasure of speaking about this at Casual Connect Seattle this year! Our talk will be available on YouTube after the conference.

It was a very interesting experience to have just a few minutes within which to convey what we’ve been working on for a year and a half. I learned a lot, especially about how to make an impression in a tiny amount of time.

It was very useful to get feedback from the judges, who are journalists and publishers in the industry - not only their written feedback but also the feedback written on their faces as they played Audio Sky.

These are the people who can make or break the game when it launches, so it was encouraging to see that they were having a positive experience with the game as they played it for the first time.

I had planned to personally play Audio Sky and show it so that both judges at the table could see the same screen, and I wouldn’t have to set up headphones for each, cutting into the already short time I had.

But right before the pitch, I decided to throw caution to the wind, and just let the judges play the game themselves. I discovered that the “aha” moment of the game, when you find that the visual cues have disappeared and you’re left playing the drumbeat all on your own, can only be experienced if you play the game yourself.

So I’ve since learned that the game will only make an impression if I let the player try it for themselves. It’s a very visceral experience, something that can’t be described or even watched; it has to be experienced.

If we launch the game with the full feature set we have in mind, including online multiplayer, I’ll be happy.

Beyond that, if the game is successful, I hope to build a team around the game to take it to the next level, and work with more musicians to get their unique feel into the musical loops in the game and give the players more to creatively play with.

For now, though, we just have to finish this and get it out, and that’s more than enough to think about at the moment.